The buying up of tropical forest by private companies and foreign governments enhances deforestation in the majority of cases, new data confirms.
Palm oil, wood fibre and tree plantations were the commodities most consistently linked with increased tropical deforestation over the past two decades, according to the study.
The assessment, published in Nature Geosciences, explores the consequences of more than 80,000 land deals made from 2000 to 2018 across 15 countries in South America, sub-Saharan Africa and south-east Asia.
Its findings suggest that land acquisitions may lead to “steep trade-offs” between development and preserving forests for “the communities and ecosystems that depend on them”, the study’s lead author tells Carbon Brief.
Cut down
Around one-quarter of all of the carbon stored on land can be found in tropical forests.
Rampant deforestation is causing this carbon to be released into the atmosphere. Tropical deforestation currently accounts for around 8% of all human-caused CO2 emissions.


The new study examines how large-scale land acquisitions by private companies have affected tropical deforestation in the past two decades. “Large-scale” acquisitions are those that cover at least 200 hectares of land, according to the study authors. Deals can either be permanent or for a fixed period of time.
Land deals are typically made between national governments and private firms or foreign governments. At present, around 76% of large-scale land acquisitions in global south countries are made by foreign investors, the authors say.
Once investors acquire land, they can choose to leave it unchanged or convert it for activities, such as mining or for the production of commodities, including palm oil, wood fibre or timber. In their research paper, the authors write:
“Governments in the global south have often welcomed these investments as a means to potentially facilitate technology transfers and the inflow of capital as well as to promote rural development and local job creation.”
For the study, the authors compared public records of land acquisitions with satellite data showing changes to tree cover from 2000 to 2018 for 15 countries across South America, sub-Saharan Africa and south-east Asia.
The maps below show the distribution of large-scale land acquisitions in Mexico (top left), South America (bottom left), sub-Saharan Africa (top right) and south-east Asia (bottom right), according to the public data.
On the map, colour is used to indicate the presence of logging (orange), mining (green), palm oil (purple), new plantations (blue), established plantations (yellow) and wood fibre (black). 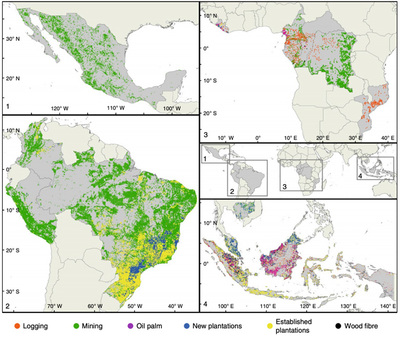 
Global change
The research finds that, compared with similar areas that have not seen private investment, areas with large-scale land acquisitions had higher forest loss in 52% of cases.
The rate of forest loss within privately acquired land varied from country to country. From 2000 to 2018, Brazil, Cambodia, Indonesia, Liberia, Malaysia and Mozambique lost more than one-tenth of their forests between 2000 and 2018, the study finds.
The study’s lead author, Dr Kyle Davis, an environmental scientist at the University of Delaware, Newark and at Columbia University, New York, explains to Carbon Brief:
“Our study provides new insights into large-scale land acquisitions as an important influence on forest loss in the global south and their potential role in altering the environment in targeted areas.”
The proportion of a country’s forest that is held by private firms varies widely from country to country. For example, just 2% of Peru’s forests are privately owned, compared to 79% in Gabon, according to the study.
The study also finds that, over the past two decades, land acquisitions were more likely to be handed out for forest than other types of land, including grassland and agricultural land, in most of the countries studied.


This finding suggests that companies are currently incentivised to invest in activities that require the conversion of primary forest, says Dr Charlotte Wheeler, a researcher of tropical deforestation from the University of Edinburgh, who was not involved in the study. She tells Carbon Brief:
“I think it’s very interesting to see that large-scale land acquisitions are granted favourably in forest areas compared to non-forest areas – showing there are clear policy incentives for investment into extractive industries.”
Palm oil to gold mining
The research also suggests that certain activities, including palm oil, wood fibre and tree production, were consistently associated with deforestation over the past two decades.
In contrast, mining and logging had more mixed effects on deforestation, the results suggest.
The maps below show where there have been significant increases in forest loss rates in privately acquired areas, when compared to non-investment areas (yellow to red) and where there have been significant decreases in loss rates, when compared to non-investment areas (blue).
(It is important to note that blue areas did not see an overall decrease in deforestation, but rather less deforestation than areas that were not privately owned.)
The scale bars are used to indicate the proportion of forest lost from 2000 to 2018. For example, red indicates that all forest in the privately acquired forest has been lost, whereas orange indicates around one to three quarters have been lost. 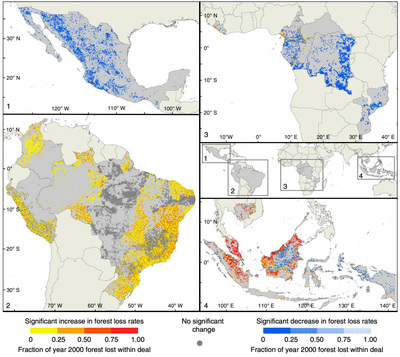 
The map indicates that privately acquired land in south-east Asia, largely in Indonesia, saw significant increases in forest loss over the past two decades. Most of this privately acquired land has been used for palm oil plantations, according to the study.
In South America, wide-scale mining across the Amazon was associated with increased forest loss, according to the study.
In Mexico, however, mining was associated with decreases in deforestation, when compared to non-investment areas.
“This may be due to what is being mined [in each region],” says Wheeler.
Many parts of the Amazon have seen increases in gold mining in recent years, she says. Gold mining can be more damaging to the landscape than other types of mining because it requires large areas of forest to be razed in order for deep-seated gold deposits to be reached.
In many parts of sub-Saharan Africa, deforestation was lower in privately acquired land than in non-investment areas. This was the case for parts of central Africa that had been acquired by logging companies.
However, it is worth noting that “investments in Africa are often granted in places where deforestation is already occurring”, says Davis, which could explain why rates of forest loss were not significantly higher in privately owned land.
‘Trade-offs’
Overall, the findings suggest that the purchasing of tropical forests by private companies may come with “steep trade-offs”, says Davis:
“While encouraging foreign investment may offer an option for increasing rural development in some countries, policymakers should be careful that such investments do not lead to steep tradeoffs for their country, including for forests and the communities and ecosystems that depend on them.”
The findings “confirms that, on balance, large-scale land acquisition is associated with increased deforestation”, says Dr Martin Sullivan, a lecturer in statistical ecology at Manchester Metropolitan University, who was not involved in the research. He tells Carbon Brief:
“However, there is a lot of complexity behind this headline result. [One] uncertainty is the long-term effect of large-scale land acquisition on deforestation rates. Do deforestation rates remain high in these areas or does it reduce with time?”
More info:  Davis, K. F. et al. (2020) Tropical forest loss enhanced by large-scale land acquisitions, Nature Geosciences, https://www.nature.com/articles/s41561-020-0592-3
Original source: Carbon Brief
TWITTER
FACEBOOK
WHATSAPP
PRINT
E-MAIL
TWITTER
FACEBOOK
WHATSAPP
E-MAIL