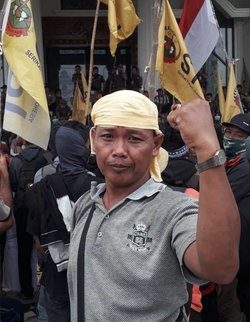 Peasants living in Tebo district in the Jambi province of Indonesia, who have long been resisting the attempts of land grabbing by big plantation firms in the region, were in for a shock when the police arrested Junawal, a local peasant leader and organiser on May 26, 2020.

Since its inception, PT- LAJ has been under the spotlight for all the wrong reasons.

Peasants allege that in the name of “natural rubber plantations” what is indeed happening is large scale corporate land grabbing, with the backing of international institutions. For instance, this conflict in Tebo district has its roots in the Tropical Landscapes Finance Facility (TLFF), a partnership between the UN Environment, World Agroforestry Centre, ADM Capital and BNP Paribas. Under a US$ 95 million Sustainability Bond, this partnership finances a sustainable natural rubber plantation in two provinces in Indonesia, one of them in the Jambi province.

La Via Campesina has, for long, called out these attempts of “green-washing”, which always undermine peasant farming and real solutions to climate change. What these indeed allow for is good business for carbon companies, international conservation NGOs, consultants and industrialised countries.

On June 10, thousands of SPI peasants held a peaceful protest in front of the Tebo Police Headquarters calling for the immediate release of Mr Junawal.

“This area covers villages maintained by peasant families organised under SPI, and we had made significant steps towards making the region food sovereign. Brother Junawal was only trying to protect his village and their way of life, and there is no reason why he should be in jail for this!”, said Mr Sarwadi, who coordinates SPI’s Jambi Regional Unit.

Agrarian Reform Program – a much-touted public policy initiative of the Indonesian Government – guarantees peasant families right and ownership over their land and gives them full control over the local food production system. It came about after years of struggle led by peasant unions like SPI. This program addresses various agrarian issues including distribution of land certificates and plots of forest land.

In Tebo, however, locals tell a different story. Large plantation firms have laid siege over the region for timber plantations, and peasant families accuse the firm of forced evictions allowing for large scale land clearing.

“While fully supporting the Agrarian Reform program of the government, peasants organised under SPI have worked hard to ensure our country’s food sovereignty. In the process, we have built schools, local markets, peasant-led cooperatives, cultural and religious centres across the country, including here in Tebo district. Yet, to please a few large plantation firms, our people are being criminalised? On what basis?”, asked a furious Agus Ruli who is part of the Union’s central leadership.

The crackdown has galvanised SPI members across the country.

“Our brother Junawal is being accused of burning of five units of heavy equipment owned by PT LAJ on May 14, 2019. The fact is that Junawal only defended land grabbing, eviction of gardens and agrarian reform villages directed by Mr Jokowi, all of which were carried out by PT LAJ”, Sarwadi said.

Junawal and SPI peasants in Tebo Regency defend their land rights guaranteed by the United Nations Declaration on the Rights of Peasants and Other People Working in Rural Areas (UNDROP). Is defending our rights a crime?” a visibly enraged Sarwadi added.