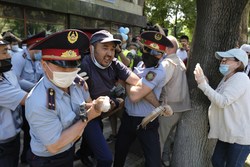 
Kazakhstan: Activists jailed in criminal probes
(Berlin) – Kazakh authorities should release an activist arrested for knocking off a police officer’s hat during a protest and drop criminal charges brought against her, Human Rights Watch said today.
On June 8, 2020, Kazakh police arrested the activist, Asya Tulesova, 36, two days after she angrily confronted officers who were manhandling and detaining protesters, including older people, at an unsanctioned, but peaceful June 6 rally in Almaty, Kazakhstan’s largest city. In doing so, she knocked off a police officer’s hat. On June 10, a court authorized holding her in pretrial detention for 10 days on charges of “insulting a police officer” and “violence against the police,” which carries a maximum three-year sentence.
“Locking up Aysa Tulesova on the basis of these disproportionate charges is gross overreach on the part of both the police and the courts,” said Mihra Rittmann, senior Central Asia researcher at Human Rights Watch. “Restricting peaceful rallies and pursuing criminal sanctions against Tulesova shows Kazakhstan’s repressive face when responding to peaceful protest.”
Unsanctioned protests took place in cities across Kazakhstan on June 6 in response to separate calls from two opposition groups for nationwide peaceful gatherings. The two groups are the unregistered Democratic Party, and the exiled Democratic Movement of Kazakhstan (DVK), which has been declared “extremist” and banned in Kazakhstan. Protesters expressed various demands, including a ban on leasing land to foreign companies and the release of political prisoners, such as Max Bokaev, a human rights defender imprisoned for peacefully protesting proposed land code amendments in 2016.
Video recordings from June 6 show police aggressively breaking up protests, grabbing people by their arms and legs and hauling them to police vehicles. The Ministry of Internal Affairs reported that police detained 53 people in Almaty.
Tulesova said in a post uploaded to her Facebook page on June 8, “I acted in an emotional outburst in response to, as I consider it, the inhumane, cruel, and unlawful treatment of police against peaceful unarmed citizens.”
Police twice detained Tulesova on June 6 along with other protesters but released her each time after some hours. They summoned Tulesova for questioning the evening of June 8 and arrested her on criminal charges of “insulting a police officer” and “violence against the police.”
Her lawyers called her pretrial detention unlawful, saying that Kazakh criminal procedural law envisages pretrial detention only in cases in which the charges carry a minimum five-year sentence. The prosecutor had contended during the hearing that if Tulesova was released, she would continue to “carry out her criminal activities,” her mother said in a Facebook video.
In April 2019, Tulesova, known for her civic engagement and environmental activism, gained broader notoriety in the country for holding up a banner during the Almaty marathon with the words “You Can’t Run from the Truth.” She and her friend Beibarys Tolymbekov were sentenced to 15 days’ detention at that time for violating Kazakhstan’s restrictive public assembly law.
President Kasym-Jomart Tokaev promised to reform Kazakhstan’s public assembly law after police responded to protests against his election in June 2019 by detaining thousands of people. In late May, the president signed a new law regulating the right to assembly. Although Kazakh authorities have hailed the law as a reform, it does not protect the right to peaceful assembly guaranteed by international law, including treaties to which Kazakhstan is a party.
Tulesova is not the only activist facing serious criminal charges after criticizing the government, Human Rights Watch said.
On April 17, the authorities arrested the political activist Alnur Ilyashev, 43, on charges of “disseminating knowingly false information” for social media posts criticizing the majority Nur Otan party. The next day, a court authorized his continued detention for two months. Because Ilyashev is accused of committing the crime during a state of emergency, the charge carries a maximum sentence of seven years in prison.
His arrest follows a meeting between activists, including Ilyashev, and Nur Otan party members at the party offices in Almaty in early March. At the meeting, activists raised questions about corruption in the ranks of the party and Ilyashev held up a poster saying “Stop Nazarbaev System,” a reference to Nursultan Nazarbaev, the country’s former president.
Ilyashev’s lawyer, Nurlan Rakhmanov, said at a news conference on April 22 that the state commissioned a rushed and questionable psychological-philological forensic analysis of Ilyashev’s posts, on which the government based the charges. The analysis concludes that because Ilyashev disseminated the information during the state of emergency imposed in response to the Covid-19 pandemic, he was “endangering the public order.” Ilyashev’s trial is to start June 12.
International and local human rights groups have called for Ilyashev’s release.
“Kazakh activists shouldn’t be facing prison time for exercising their rights to free speech and peaceful protest,” Rittmann said. “The authorities should withdraw criminal charges against Alnur Ilyashev and Asya Tulesova and let them go free.”