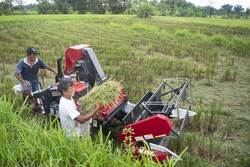 by Mardika Parama
President Joko “Jokowi” Widodo has instructed the Public Works and Housing Ministry to expand the government’s food-estate program by developing 165,000 hectares of land in Pulang Pisau regency, Central Kalimantan, into farmland, a senior official has said.
Minister Basuki Hadimulyono said a total of 85,500 ha of land in the area already functioned as farmland so the ministry only needed to clear 79,500 ha of scrubland for the development. The project aims to boost productivity by 2 tons of rice for each ha of land.
“We will start developing the land this year until 2022. This project is our second-highest priority after the development of the National Strategic Tourist Areas [KSPN],” he said during an online video conference on Tuesday.
He further said the land designated for the project was alluvial and not peatland, even though it was previously used in the government’s Peatland Development Project (PLG).
The ministry will require Rp1.05 trillion (US$74.5 million) to build the project’s irrigation system, according to Basuki, and the development project will be carried out in conjunction with the State-Owned Enterprise Ministry through an investment scheme.
“We will handle the irrigation system rehabilitation program on this former PLG land,” he said.
Government data presented by President Joko “Jokowi” Widodo on April 28 showed that over 20 provinces faced shortages of staple foods, such as garlic, sugar, chilis and eggs, making food security one of his administration’s priorities.
However, Agrarian Reform Consortium (KPA) secretary-general Dewi Kartika said the government’s botched agrarian reform program was to blame for the shortages as vast plots of farmland were constantly being encroached on by mining concessions and corporate plantations.
Agrarian reform was among the National Priority Programs pushed by Jokowi’s first-term administration in an effort to better distribute development and improve the quality of people’s lives.
It includes programs that are expected to alleviate poverty in villages, improve the country’s food security and land production, acknowledge ownership rights over land owned by individuals, the state and the general public, including land utilization in the popular interest.
“According to National Land Agency data, our farmland shrank by 650,000 ha in 2018. Much of this was converted to be used by other business sectors such as palm oil, natural resources extraction and infrastructure,” Dwi said in May.
She added that she feared the government’s plan to clear 600,000 ha of peatland in Central Kalimantan would yield the same result as a similar measure taken under former president Soeharto, which ended up leading to crop failures and subsequent food shortages.