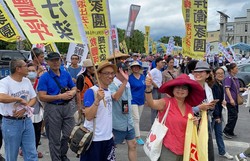 Thailand’s CP Group suspends plans for 6 poultry farms in E. Taiwan
TAIPEI (Taiwan News) — Thai food company CP Group announced Friday (June 5) it was temporarily halting plans to build six poultry farms in Hualien County following protests over environmental concerns.
Local residents, including indigenous villagers, recently won the support of other social groups such as the Presbyterian Church for their protests against the farms. They took to the streets over the past few weeks in several of the affected townships, including Guangfu, Fenglin and Shoufeng, and handed over a petition to Hualien County Magistrate Hsu Chen-wei (徐榛蔚) on May 25, CNA reported.
The farms will have 375,000 chickens (more than the 325,000 people who live in all of Hualien County), the protesters pointed out. They expressed concern about the polluting impact of the farm on air and water quality and the increased traffic in their communities.
In a news release Friday, CP said that until it had obtained the consensus of local residents, it would temporarily suspend construction work in order not to provoke more protests.
The company, also known as Charoen Pokphand, is one of Thailand’s largest corporations, operating 7-Eleven convenience stores in the Southeast Asian country as well as the True telecom system. This year, CP is also in the process of taking over one of Thailand’s two largest supermarket chains, Tesco Lotus, following British retailer Tesco’s decision to pull out of Asia.