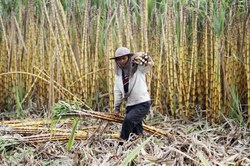 Korn Art, 38, shoulders sticks of sugarcanes to load onto an ox-cart at a farm in Kandal province, Cambodia.

A Chinese sugar company with a large long-term land concession in Cambodia came under fire from NGOs Tuesday for leasing parts of the concession to local villagers, collecting rent instead of engaging in the activities stipulated in its contract with the Cambodian government.

The Hengfu Group Sugar Industry, the mother company of five local subsidiaries in Cambodia, was awarded a 70-year concession in 2011 spanning 400,000 hectares (1,544 square miles) in Preah Vihear province in return for promising to invest U.S. $1 billion.

The Cambodian government held an opening ceremony for a factory on the concession in 2016, where Prime Minister Hun Sen noted that the companies invested $360 million for stage one of the development scheme.

But by charging rent to villagers that live there instead of using the land for sugar production, the company is in breach of contract, NGOs say.

“Many Cambodian villagers are leasing land from the Chinese companies,” he said.

Lor Chan added that following the concession, the local villagers filed complaints against the companies that are still pending.

“It is illegal. They breached their land concession contracts with the government. The companies have no legal ground to lease land to villagers,” he said.

The concession impacted thousands of villagers from 25 villages in three districts in the province, according to Phek Sophoan, of the Ponlok Khmer Organization, which advocates for the human rights of indigenous people living in the province’s highlands.

Phek Sophoan told RFA that outside villagers and government officials are also leasing the land as opportunists, taking advantage of the situation to encroach on land that should belong to the highlanders.

“The companies were awarded the land concession for sugar plantations. So when they are out of business, they must return the land back to the government so the people who used to cultivate it can do so again,” he said.

The companies suspended operations due to internal problems, but promised to resume in 2020, according Preah Vihear Provincial Agriculture Department Director Peung Tryda. The director stated this some time after they suspended operations. RFA attempted to contact him Tuesday, but he could not be reached.

RFA reached Preah Vihear Provincial Governor Prak Sovann, but he refused to comment about the situation.

Local farmer Yeay Sok, told RFA that she leased 20 hectares (50 acres) of land at 200,000 riels ($48.70) per hectare per year from the companies to cultivate rice. She said she paid half first and will pay the rest after harvest.

Yeay Sok, who has already planted on five hectares, said she thinks the cost of leasing the land is fair to the farmers.

“Many Cambodians are leasing land from the Chinese,” she said, adding that people from Kampong Cham and Prey Veng provinces have come to lease parts of the concession with annual contracts.

“If they let us, we will continue to lease the land next year,” she said.

Yeay Sok said she had no idea why the companies stopped cultivating their sugar plantations, adding that there are now local cattle grazing where the sugar cane was once planted.

But an indigenous Kui villager who refused to be named because of security concerns told RFA that he lost a six hectare communal plantation to the companies in 2012 and believes they shouldn’t be allowed to rent out the land now.

“It was my land. They took it because they said the government gave them [the rights]. But now why stopped [planting sugar] so they are leasing the land to people and I don’t think that’s fair,” the villager said.

He argued that the companies need to return the land, which has been in his family for generations, now that they are out of business.

“So Cambodians are no longer in charge of the land, and Chinese own it. It’s very strange,” he said.

Economic land concessions (ELCs) have been at the heart of land disputes between the government and its citizens as residents are often forced off their land so that it can be exploited.

Prime Minister Hun Sen’s government has issued concessions to more than 2.1 million hectares of Cambodian land to investors, including major Chinese and Vietnamese companies and local firms with ties to the governing Cambodian People’s Party (C.P.P.), according to a 2015 report by the human rights group LICADHO.