China gets the meat that risks U.S. workers' lives. Missouri helped it happen. 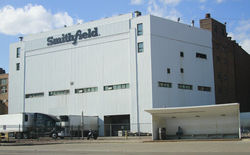 China gets the meat that risks U.S. workers' lives. Missouri helped it happen.
By the Saint-Louis Post Dispatch Editorial Board
At the top of a growing mountain of ironies in this pandemic, President Donald Trump continues to rail against China as the source of the coronavirus crisis while ordering U.S. meatpacking plants to stay open — even as the virus rages through those plants. While they work through extremely stressful conditions, a third of their products are being exported to … China.
Since mid-March, Reuters reports, U.S. pork exports to China have quadrupled. This is happening as the availability of pork is declining in U.S. supermarkets and prices are rising steeply. In essence, American workers are risking their lives, and American consumers are paying through the nose, so American-raised pork can serve the country that, Trump says, lied to the world about the start of the pandemic.
Republicans have been especially vocal about China’s culpability. Missouri’s Republican attorney general, Eric Schmitt, is even suing China’s government. That outrage would be more impressive if Missouri’s GOP hadn’t pulled out all the stops a few years ago so a Chinese company could buy up a major pork processor here.
In 2013, Missouri’s legislative GOP majority pushed through a law altering a previous ban on foreign ownership of agricultural property in the state. The new law allowed up to 1% of total agricultural property to come under foreign control. That’s a bigger number than it sounds like in a vast agricultural state like Missouri.
In what those lawmakers would have you believe was a coincidence, this all came about as Virginia-based Smithfield Foods, America’s largest pork producer, was closing a deal to sell itself to Hong Kong-based Shuanghui International. Smithfield’s operations were spread across several states, including Missouri — where the law banning foreign ownership was a fly in the ointment. The change in that law allowed Shuanghui to legally receive more than 40,000 acres of Missouri agricultural land.
As the Post-Dispatch reported at the time, that change was pushed through by lawmakers who had received significant campaign contributions from Smithfield. All sides claimed, straight-faced, that the contributions were unrelated to the legislation. When then-Gov. Jay Nixon, a Democrat, vetoed the measure, the Republican majority overrode his veto. When Democrats tried to get the ban on foreign ownership restored in 2018, Republicans wouldn’t move the bill.
The original ban on foreign farmland ownership had been in place since the 1970s, in response to overseas companies buying up U.S. agricultural holdings. As the Missouri Farm Bureau put it in a 2014 statement on the topic, the fear was that foreign farmland ownership could “compromise our national security and domestic food production capabilities.”
And now here we are. As Reuters reports, Chinese-owned Smithfield was the biggest U.S. exporter of pork to China between January and March. As with those campaign contributions of 2013, Missourians can draw their own conclusions about whether that’s just a coincidence.