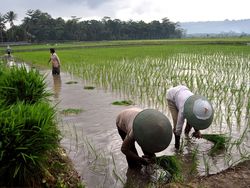 
Land conflicts flare across South-East Asia during coronavirus lockdowns
JAKARTA: Lockdowns to contain the Covid-19 (coronavirus) in South-East Asia have made farmers and indigenous people more vulnerable to losing their land, according to land rights activists who are backing new technologies to help track the growing number of conflicts.
More than 4.4 million people have been reported to be infected by the coronavirus globally and about 300,000 have died, according to a Reuters tally.
Worldwide, farmers have been unable to tend to their fields, and some indigenous people kept from forests because of restrictions on movement, making it easier for illegal loggers and companies to encroach their lands, analysts said.
"The pandemic has opened an opportunity for activities such as illegal logging and land grabs across Asia-Pacific because of less oversight and accountability," said David Ganz, executive director of advocacy group The Centre for People and Forests.
"Many conflicts are legacy issues of weak tenure rights and poor forest governance exacerbated by the current situation. But some are a result of companies moving ahead on controversial operations," he told the Thomson Reuters Foundation.
In Indonesia, two farmers were killed in March in clashes over a long-standing land dispute with a palm oil firm in South Sumatra province, according to the Indonesian Forum for the Environment (Walhi), an environmental group.
In the Philippines, five farmers were killed in Sorsogon province to the south of Manila earlier this month in a territory dispute, according to human rights group Karapatan.
Philippine authorities said the men were armed rebels.
The Philippines was the most dangerous country in the world in 2018 for land rights activists, according to Britain-based human rights group Global Witness.
Land rights activists worldwide are at heightened risk now, with their access to justice also stymied because of the lockdowns, said Michel Forst, the former United Nations special rapporteur for human rights defenders.
"Land and environmental defenders are sitting ducks," he said in a statement. "If their lives were at risk before, this pandemic has only exacerbated an already difficult situation."
In India, authorities have relaxed environmental norms for mining and industrial projects, with the lockdown making it impossible for people "even to resist" the threats to their land, said Tushar Dash, an Indian forest rights campaigner.
Elsewhere in the region, with police and security forces engaged in enforcing lockdowns, cases of illegal logging have been reported in Nepal, Myanmar, Cambodia and Indonesia, said Ganz.
Governments can step up monitoring of land and forests with remote sensing technologies now, he added, citing a recently launched tool that uses geospatial data to map communities and areas at risk of conflict because of the coronavirus.
A separate data monitoring system led by the International Land Coalition (ILC) is crowd-sourcing cases of land conflicts related to the coronavirus. Nearly two dozen such cases are being vetted currently, according to the ILC.
"More importantly, governments need to recognize tenure rights of local communities and indigenous peoples and create channels for communities to report grievances," Ganz said. - Jakarta Post/Asian News Network