After seven years, displaced Zambian villagers might get land 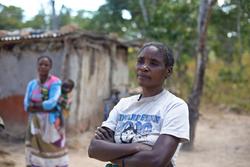 When Felicia Kasenga and her family were forcibly evicted by a commercial farmer from land in Luombwa, they ended up homeless. Kasenga and her 10 children had to sleep in the open for several months. (Photo: Samer Muscati for Human Rights Watch)
Mail & Guardian | 18 May 2020

(Note: the full High Court judgement is here and a summary here)


After seven years, displaced Zambian villagers might get land
by Juliana Nnoko-Mewanu, Human Rights Watch
“Where will we go looking for land? There isn’t any land left,” Elisabeth, a 24-year-old mother of four, asked me in 2016. She, along with other rural residents of the Serenje district of Zambia’s Central Province, was displaced seven years ago — some forcibly evicted from their traditional land.
Some commercial farmers that leased land in the district had burned or bulldozed their homes and uprooted trees. When I spoke to Elisabeth and other evicted residents, they had received no compensation and no meaningful opportunity to contest their removal.
Dozens of residents evicted by one commercial farmer in 2013 lived out in the open for months, then later in tents or shoddy housing on the fringes of a government forest reserve, with inadequate access to water and no source of livelihood or permission to cultivate land.
After the release of our findings in 2017, 13 displaced villagers filed a complaint with the Zambian High Court with the help of the Zambia Land Alliance and Southern Africa Litigation Centre.
On April 30, a High Court in Lusaka ruled in their favour, holding that the conversion of customary land was illegal and that the resulting forced displacement violated the community’s rights to life, freedom of movement and association, dignity, and equal protection of the law. The court ordered the attorney general, the local government and one of the companies at issue to provide relief, including providing alternative land and compensation for rights violations.
The government should swiftly execute this order to ensure that community members have access to land and water and get help with building new homes and returning to farming. The government should also ensure that communities can adequately shelter-in-place to contain the spread of the coronavirus. Additionally, they should fully enforce the court order that the commercial farm must compensate them for their destroyed property, which includes ancestral graves.
The Zambian government promotes large-scale agricultural investments to diversify its economy and reduce rural poverty. Central Province, known as Zambia’s breadbasket, has numerous large “farm blocks” where the government has promised to build roads, develop irrigation and other infrastructure to serve multiple farms.
The villagers who sued live in the Muchinda chiefdom, a territory and people ruled by Chief Muchinda in Serenje district, which covers about 324 000 hectares and had been parceled out into four large farm blocks which take up more than 273 000 hectares.
The chiefdom also has a forest reserve, an open-air prison facility with farms run by the government and a “resettlement scheme”. For villagers in the chiefdom, land is scarce and beckons commercial farmers. Villagers were forced off their plots of land in this territory as soon as investors leased the land and started clearing to plant, sometimes without all the required permits.
In 2017, President Edgar Lungu was quoted saying: “I would like to believe that investors do everything within the law” and that the government expects investors to provide adequate compensation to villagers displaced to make way for business ventures such as large-scale farming.
Our research and the petitioners’ complaint showed a different reality. Families who lived and farmed for generations were displaced without due process or compensation, with some left hungry and homeless. The high court ruling is a first step in righting the wrong done to them.
Petitioners had sought more and requested that the court cancel the commercial farm’s land title, and questioned the legality of the conversion of their land into a farm block. The court stopped short of doing so. It found that though the procedure for converting the land was irregular, it could not cancel the title of the farm since the venture furthered the government’s national development plan. The court then ordered the government to provide alternative land and compensation.
In the current Covid-19 crisis, community members who have lost land — and their livelihoods — are more vulnerable to infection. Community members who have control over their customary land, plant their own food and are self-sufficient can self-isolate. For others, including indigenous people who have been displaced or evicted and have lost access to homes, farmland and forests, the pandemic exposes and deepens their precarious situation.
The president should direct responsible senior officials and local leaders to urgently identify and provide alternate land, compensation and assistance to these community members in a way that preserves their connection to their ancestral area. Given the scarcity of land in the area, alternative land might be difficult to find. But the government has to do its best to find it — and do so quickly.