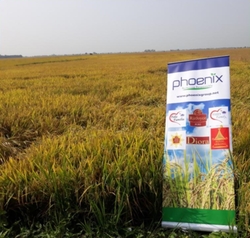 One of the world's biggest commodity traders -- in food, agriculture, metals and minerals -- has just collapsed. According to documents seen by Reuters, Dubai-based Phoenix Global, a company backed by the World Bank and several multinational banks, is in the process of being liquidated.

Phoenix Global was a 20-year old giant in contract production, direct farming and trading of cereals, fruit, oilseeds and horticultural crops. It directly farmed more than 150,000 hectares in Kazakhstan, Ukraine, Russia, Uganda, Mozambique and India, and was planning to expand further. Registered in the British Virgin Islands but headquartered in Dubai, the company was run and majority-owned by Gaurav Dhawan. Dhawan had taken Phoenix to the number three slot in the world's rice trade -- just behind Louis Dreyfus and Olam -- and was hoping to reach number two. The company generated annual sales of US$3 billion, with rice accounting for 30% of its revenue.

According to Reuters, the company recently piled up US$400 million in losses from its derivatives trading and filed for liquidation. Phoenix blames coronavirus for its fate.

GRAIN first started following Phoenix in 2018 when it announced it would invest in Karuturi Global, an Indian flower company notorious for its failed rose farms in Kenya and its 300,000 hectare land grab for food production in Ethiopia. Phoenix's gamble on Karuturi came as a surprise, given the controversies Karuturi was mired in and its dismal performance on the ground. (Today, Karuturi is also in the process of being liquidated.)

Phoenix was no stranger to land grab controversies. At one point it owned 12% of Trigon Agri, which controlled 300,000 hectares in Ukraine, Russia and Estonia, and itself was coming under scrutiny for its land acquisitions in Kazakhstan where foreign ownership of land is a highly sensitive issue.

Who will get Phoenix's farmland assets now?

For more information, see Reuters' report at https://www.reuters.com/article/us-phoenix-bankruptcy/commodities-trader-phoenix-goes-into-liquidation-due-to-coronavirus-documents-idUSKBN22K1N8 and details from The Financial TImes at https://www.ft.com/content/e486c1f4-05fc-4d5c-b7e5-246d4d2a7f2b, as well as background articles at https://www.farmlandgrab.org/cat/show/847