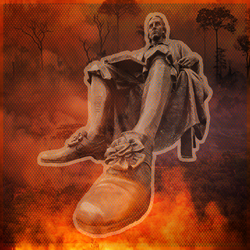 Fossil Fuel Divest Harvard | 12 May 2020
Groups call on Harvard University to stop land grabs as new report exposes harm done to communities in Brazil
Rural communities in Brazil are suffering from food shortages, chemical pollution and violent human rights abuses because of large land deals made by Harvard University in the years following the 2008 financial crisis.

A new report by Rede Social de Justiça e Direitos Humanos and GRAIN exposes how the University used multiple offshore companies to grab over 400,000 ha (980,000 acres) in the Brazilian Cerrado, the world’s most biodiverse savanna — land that Harvard is now trying to sell.
Civil society groups* are now calling on Harvard University’s administrators to urgently halt the sale of its Brazilian farmlands, return the lands to the affected communities, and pay reparations for the damages these communities have suffered. The groups say that Harvard played a key role in a disastrous, global race for farmland among financial companies that began in 2008 and that has increased deforestation and created the conditions for the emergence of new diseases, such as Ebola and Covid-19. As the world spirals into another economic crisis, Harvard now needs to make amends and set an example by adopting a clear policy against future investments in farmland.
“Harvard’s farmland deals are violating local communities’ rights to land, food and water. And by driving agribusiness deeper and deeper into what’s left of the world’s tropical forests and savannas, these deals are setting us on the path to more pandemics in our future,” said Tristan Quinn-Thibodeau, National Campaigner for ActionAid, a social justice organization that helped bring a representative of the communities to Harvard last fall. “Universities like Harvard and pension funds like TIAA need to stop buying up farmland and leave lands and forests in the hands of local farmers and communities.”
The report shows how the University knowingly acquired lands that were covered in forests and used traditionally by local communities. Members of the affected communities say that Harvard’s local intermediaries used bribes and violent intimidation to push them off their lands.
“We were watching, wondering from one hour to the next when we would be killed”, says one resident of Baixão do Aleixo, a village in the state of Bahia, where Harvard acquired a large area of land in 2010. “Once, we were right in this house here and a car passed by that was full of men armed with guns. They stopped and got out to mark spots on the ground.”
“The communities who have lived in the areas of Harvard’s Brazilian farms for many generations have been shut out of their traditional lands and forests,” says Daniela Stefano, a researcher with the Brazilian human rights organisation Rede Social de Justiça e Direitos Humanos who conducted field research at the Harvard farms in the states of Piauí and Bahia in October 2019. “Some of the farms are not operating but security guards and fences prevent the local people from accessing them for food production. Others cultivate vast areas of soybeans and spray toxic chemicals that destroy the soil and contaminate the water sources and crops of the communities.”
“At a time when we need to be putting land back into the hands of indigenous peoples and smallholder farmers in order to maintain vibrant agro-ecosystems and preserve forests and wildlands, Harvard’s endowment and pension funds led by TIAA/Nuveen are doing precisely the opposite,” said Jeff Conant, Senior Forests Program Manager with Friends of the Earth U.S. “These funds are concentrating land in industrial farms that erode food sovereignty, degrade climate resiliency and further threaten public health.”
Harvard’s deals in Brazil are part of a $1 billion farmland portfolio the University acquired in the United States, Brazil, Eastern Europe, South Africa, New Zealand and Australia.

​”Farmers in the US are increasingly concerned about the consolidation and control of farmland by corporate agribusiness due to speculative investments by TIAA and the Harvard Endowment Fund. While many farmers and rural communities struggle financially from years of chronically low commodity prices and as COVID-19 disrupts direct market sales, the impacts of these investments on rural livelihoods rather than shareholders’ profit margins should be scrutinized,” says Jim Goodman, board president of the National Family Farm Coalition of the US. “A national conversation about large-scale land investments by corporations and the ramifications for independent producers and workers ​who put food on our tables everyday is long overdue. Through our alliances with farmer and fisher organizations worldwide we’ll continue to fight the influence and control that agribusiness corporations have over our food, farm and fishery systems.”

Harvard students, faculty and alumni have previously called on University administrators to prevent the Endowment Fund from financing land grabs and the climate crisis.
“We are frustrated by our University administration’s unwillingness to take action to prevent its Endowment Fund from bankrolling land grabs and other investments that are drivers of the climate crisis and global pandemics,” says the student-led campaign Fossil Fuel Divest Harvard. “This has to stop, now.”
The full report, Harvard’s land grabs in Brazil are a disaster for communities and a warning to speculators, is available here: https://grain.org/e/6456
Original source: Medium
TWITTER
FACEBOOK
WHATSAPP
PRINT
E-MAIL
TWITTER
FACEBOOK
WHATSAPP
E-MAIL