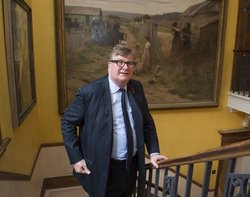 Crispin Odey of Odey Asset Management. (Photo: Shutterstock)
Global Witness | 6 May 2020
Razing the stakes
Controversial hedge fund tycoon Crispin Odey invested more than US$170m into one of Brazil’s most damaging agribusinesses despite it deforesting large areas and receiving numerous environmental fines
Mr Odey, founder of Mayfair-based Odey Asset Management, is one of the most high profile hedge funders in the UK. In March, the Guardian revealed his company held a “sizeable stake” in the Brazilian firm SLC Agricola. The producer of soy, cotton and corn has cleared at least 30,000 hectares of the Cerrado, a forested savannah region equal in size to Spain, France, Germany, Italy and the UK combined.
The Cerrado is estimated to contain 5% of the world’s species, including 11,000 types of plant, 860 birds and 90 million insect species. Clearing forests in the Cerrado region to make room for crops accounted for a whopping 29% of Brazil’s total carbon emissions between 2003 and 2013.
By any measure, therefore, a company destroying this biome is not one a responsible investor should go near. However, using financial databases kept by Thomson Reuters Eikon, Global Witness, working with not-for-profit analysts Profundo, has discovered Odey invested huge sums in SLC Agricola shares: more than US$130m in July 2018 followed by another US$43m in shares listed on the US stock exchange in February 2019. This meant that as of April 2019, it owned an estimated 14% of the entire company.