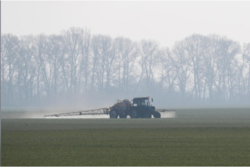 An agricultural worker drives a tractor spreading fertilizers to a field of winter wheat near the village of Husachivka in Kiev region, Ukraine April 17, 2020. (Photo: REUTERS/Valentyn Ogirenko)
Reuters | 27 April 2020

by Maha El Dahan
DUBAI (Reuters) - Saudi Arabia’s state grain buyer SAGO on Monday said it bought 60,000 tonnes of Ukraine wheat from investment firm SALIC, marking its first purchase from agricultural investments overseas aimed at enhancing the country’s food security.
The Ukraine wheat cargo was bought at $248 a tonne, after the kingdom asked Saudi private investors with farmland overseas on April 6 to supply it with around 10% of its local needs this year.
The Saudi call comes as regional food importers scramble to beef up reserves as coronavirus lockdowns up-ended supply chains.
The world’s top oil exporter has long encouraged its private investors to pour money into agricultural investments abroad to shore up the country’s food security, without tangible results — until Monday’s purchase in terms of imports for SAGO.
The state grain buyer had originally estimated it would need 355,000 tonnes from private investors this year.
“The 60,000 tonnes were purchased from SALIC,” a SAGO official told Reuters.
The Ukraine wheat that was sourced is of 11% to 12% protein content.
SALIC, the Saudi Agricultural and Livestock Investment Co, was formed in 2011 to secure food supplies for the desert kingdom through mass production and foreign investments. It is an arm of the kingdom’s sovereign wealth fund, the Public Investment Fund.
Gulf states, dependent on imports for around 80% to 90% of their food, have poured cash into buying tens of thousands of hectares of cheap farmland and other agricultural assets elsewhere to enhance their food security for over a decade.
SAGO renewed on Sunday its call for investors to subscribe to supply it with the remaining quantity of wheat.
“This first round, the two companies that registered were SALIC and Al Rajhi International for Investment,” SAGO said.
“We will still buy more.”
Investors who register with SAGO to sell wheat from their investments abroad have to be at least 51% Saudi-owned, according to regulations published by SAGO.
The wheat produced abroad also has to abide by all of SAGO’s wheat import specifications and the quantity produced from one origin country can’t be less than 5,000 tonnes.
Saudi Arabia normally imports wheat from the United States, South America, Australia and Europe.
SAGO relaxed its bug-damage specifications for wheat last year, a move designed to allow for more imports of the grain from the Black Sea region.
Its first Russian wheat purchase was shipped earlier this month.