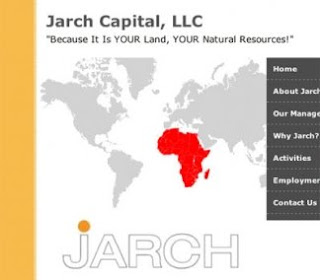 Although it slipped past the world’s media, in mid-April it emerged that Jarch Capital had doubled its landholdings in Southern Sudan. That takes the acreage owned by Phillippe Heilberg and chums to a massive 800,000 hectares, or 3,000 square miles, which the firm claims will become a gigantic agricultural plantation. Of course, for a firm whose motto is “because it is YOUR land and YOUR natural resources” there is a natural suspicion that oil or mineral goodies will be part of the deal as well.

Jarch Capital is one of those things that everyone should know about, but almost nobody does. I’ve covered its dealings in Sudan at some length, and I urge you to check out what I wrote on the subject earlier this year, when the initial option on 400,000 hectares of Sudanese land was announced.

Basically, Jarch is a “bucaneering” investment firm run by a man named Philippe Heilberg, an ex-commodities trader for the disgraced insurer/bank AIG and a man who has excellent connections on the New York cocktail circuit. On board with Heilberg are some curious names.

There’s Joseph Wilson, who rose to international fame when his wife was outed as a CIA operative after Wilson had poo-pooed the stories that the Bush administration was peddling concerning uranium exports from Niger to Iraq. Then there is Larry Johnson, an ex-CIA operative himself, who frequently appears as a talking head in the U.S. media and became something of a critic of Bush era policies. There is also J Peter Pham, a prominent neo-conservative commentator and “expert” on global issues, who had a far less critical stance towards the Bush administration. And there also used to be Gwyneth Todd, who played a role in the Clinton administration as an adviser on Middle East affairs.

It’s a well connected bunch of adventurers, although one slightly lacking in agricultural experience. What they share, apart from Pham, is an allegiance to the Democrat Party and a few have intelligence connections. The fact that such a group is set to make a fortune from plantation agriculture in Southern Sudan should set some alarm bells ringing.

It’s worth noting that agriculture is still the only economic venture that American firms can legally enter into in Sudan owing to Clinton-era economic sanctions on the Sudanese government, so if you were planning a land grab to secure oil resources, you would certainly do so under the cover of a grandiose agricultural scheme.

Although I discuss it in detail elsewhere, Heilberg has pretty much admitted that Jarch’s strategy is to back dissident movements in strategically important countries with a view to cleaning up after the fighting ends.

As he told Energy Compass last year, “states in turmoil can be fertile ground for risk-takers who are ready to cut deals with today’s rebels on the chance they’ll become tomorrow’s leaders.” Which is exactly what he did in Southern Sudan. With a referendum looming on whether the South will secede from Sudan proper, a windfall looms for those risk takers. Firms with an already existing stake in Sudan, such as France’s Total or the Chinese firm Sinopec, will lose out.

It’s an elegant, if brutal business strategy, and it holds out the potential for a return to wholesale civil war in Sudan if it goes awry, which it probably will. And Jarch is helping to set in place a reactionary oligarchy in the South to protect its assets, which will certainly not help the long suffering peoples of the area.