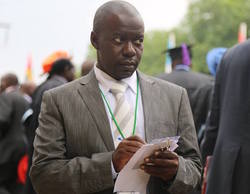 In this exclusive excerpt from his new book Why We Are Coming, author Yasin Kakande—an international journalist, migrant activist and TED Fellow—lays bare the shocking truth about the Western exploitation of Africa that is the root cause of Africans choosing to leave their homelands for the UK, US and other developed nations.
Across Africa many Western investors, including Wall Street bankers and wealthy individuals, are rushing in to acquire agricultural land and are displacing hundreds of thousands of Africans.  This shift places the food system in Africa in the hands of a few Western corporations whose interests are, first and foremost, economic gain.
The list of these recent acquisitions is long and still many of these shady deals are going unreported. Here are a few reported cases which are as graphic; The American investor Philippe Heilberg signed a farmland deal with Paulino Matip, a Sudanese warlord, to lease 400,000 hectares of land (an area the size of Dubai ) in South Sudan in July 2008. South Korean conglomorate Daewoo announced it was leasing 1.3 million hectares (3.2 million acres) of Madagascar for 99 years for about $12 an acre in 2008. In Southern Uganda about the 14,000 villagers who were evicted from their land when the Ugandan government leased 8,000 hectares of land to a Norwegian timber company (Green Resources) in the forest area of Bukaleba. British’s Tullow acquired 102,500 hectares in Lake Albert Rift basin to explore oil.
“The west’s acquisition of continental land is a threat to African economies and livelihoods”
In 2017, the Ugandan government tabled a land bill amendment proposal on compulsory acquisition of land for public use, and that it may deposit in court a befitting sum for the land it wants to acquire from the owner. President Yoweri Museveni, a western corporate puppet went on broadcast outlets to explain to the citizens that the amendments are framed for the country’s better interests, and that the government taking over land from owners they deem not suitable for agriculture and giving it to investors ultimately will bring in more revenue to Uganda. Designating some parcels as public land has been the easiest way African leaders have facilitated the land grab in their countries and then they would hand over that land to foreign investors with not so much of a fair compensation to the previous African land owners.
The African leaders who are handing over fertile African land with easy access to water to Western corporations are doing the same thing that colonialists did in earlier times when they designated millions of acres as public land. In Kenya after the highlands were declared “crown land” the British colonialists handed over to Lord Delamere 100,000 acres at a cost of a penny per acre. Lord Francis Scott purchased 350,000 acres and the East African Syndicate Ltd. took 100,000 acres, all at give-away prices. In Liberia in 1926, the Firestone Rubber Company acquired a million acres of forest land at a cost of six cents per acre. And in The Congo King Leopold II issued decrees that designated all free parcels as government land — in effect as his own property, sole proprietorship. He amassed all parcels that natives had not cultivated but instead set aside as hunting grounds or as a plentiful source of wood for building, or for mining iron ore to be used in tools and weapons. The 21st century has seen that practice continue, albeit in a different form.
“The future is much darker than what even analysts have predicted”
Even though it is important to invest in the African agricultural sector, the West’s acquisition of continental land is a threat to African economies and livelihoods. Evidence shows that these land deals often lack transparency and are frequently mismanaged by governments. Smallholder farmers who are the majority in Africa are being displaced in the process. These farmers are starting to realize what the foreign investors are doing to their livelihoods, and with nothing much to do many are resorting to migration to these countries.
In Africa the European and American foreigners own the land, mines, banks, factories, fuel stations, airlines, and all the wealth coming from these sources are shipped or transferred to the West and what is left in Africa for Africans? What do the citizens of African countries have in their countries to keep them home not to emigrate – nothing or too little to sustain their families even on the most modest expectations. This is worsened by the fact that even prospective means like employment that would give them the opportunity to own their titles and deeds to land are nonexistent. At least they can see prospects of employment even in menial jobs in the West or in Middle East countries, much less than the potential to collaborate and start their own enterprises.
African resources are fast becoming depleted and its population is growing at a faster corresponding pace. By 2050, it is predicted the population in most African countries will have doubled and the continent will have almost depleted all of its resources. The future is much darker than what even analysts have predicted and, for sure, more African migrants will continue trying to get to Europe or the U.S. where their resources have built stable economies. Europe and America are already definitely concerned about these demographics and more worried because even family planning strategies that have been promoted in the continent for a long time have not had any yields. Europe and the U.S. stand alone to address honestly the exploitation of Africa and demand from their corporations honest and decent trade practices with the continent.
Original source: The Voice
TWITTER
FACEBOOK
WHATSAPP
PRINT
E-MAIL
TWITTER
FACEBOOK
WHATSAPP
E-MAIL