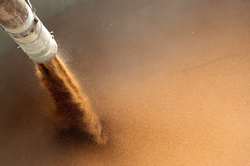 By Alaa Swilam and Maha El Dahan
DUBAI, April 6 (Reuters) - Saudi Arabia's state grain buyer SAGO is asking Saudi investors with farmland overseas to import 355,000 tonnes of wheat into the kingdom, as major food importers try to increase strategic reserves in response to the coronavirus pandemic.
Saudi, the world's top oil exporter, has long encouraged its private investors to pour money into agricultural investments overseas in order to enhance the country's food security, without tangible results so far in terms of imports for SAGO.
SAGO Governor Ahmed al-Fares said in a statement on Monday it was making a special call for Saudi investors abroad to supply 10% of the country's wheat needs. This would be in line with a policy set out a few years ago, though no clear formula for the process was ever detailed and no sale was recorded.
It was not immediately clear which private investors SAGO had invited to supply the grain. But one investor said it likely involved Saudi Agricultural and Livestock Investment Co (SALIC), formed in 2011 to secure food supplies for Saudi through mass production and foreign investments.
"There's no big investor other than SALIC in the countries that can export wheat. I expect it's SALIC that can do this," the investor, who declined to be named, said.
Saudi Arabia usually buys wheat through international tenders announced by SAGO. It was unclear whether the quantities to be purchased from investors overseas would be purchased through regular SAGO tenders, in which these investors would be allowed to participate, or if the process would be different.
SAGO was not immediately available to clarify the matter. SALIC, an arm of Saudi Arabia's Public Investment Fund (PIF), was also not immediately available for comment.
SAGO's Fares said the call to import quantities of wheat into Saudi aimed to make use of agricultural investments abroad, adding that the imported wheat would have to meet the same quality and specifications that normally apply to its purchases.
Saudi Arabia normally imports wheat from the United States, South America, Australia and Europe.
SAGO relaxed its bug-damage specifications for wheat last year, a move designed to allow for more imports of the grain from the Black Sea region, but it has yet to announce a purchase from those origins.
The grain would be for arrival periods between May and November and the quantity represents around 10% of Saudi Arabia's wheat needs.
Gulf states, dependent on imports for around 80% to 90% of their food, have poured cash into buying tens of thousands of hectares of cheap farmland and other agricultural assets elsewhere to enhance their food security for over a decade.