IMF in talks to increase its assistance to Ukraine to $9.5bn 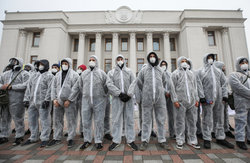 National Corps party members wearing protective suits and medical masks attend a rally near the building of the Ukrainian parliament, the Verkhovna Rada, on Mar. 17, 2020 to demand to shut the institution down during the quarantine, which lasts from March 13 to April 3. The protesters are particularly against the lawmakers passing the law on lifting the moratorium on farmland sales amid the quarantine. (Photo and text: Kyiv Post)
IntelliNews | 23 March 2020

IMF in talks to increase its assistance to Ukraine to $9.5bn
The International Monetary Fund (IMF) may increase its assistance to Ukraine to a total of $9.5bn by drawing on a $50bn emergency fund that the multinational lender established to help low-income countries cope with the stop shock of the global coronavirus (COVID-19) pandemic.
Talks are ongoing but made progress over the weekend when governor of the NBU Yakiv Smolii announced that talks with the IMF towards making more cash available had made progress.
Those reports were bolstered on March 21, according to Ukrainian News sources familiar with the negotiation process.
Two programmes are under discussion. Under the original Extended Fund Facility (EFF) Ukraine is to receive $5.5bn in a programme that was agreed in principle in December but which the government in Kyiv has been unable to close due to foot-dragging on reforms – specifically the government has failed to put in place a law that would ban the government from returning banks to their former owners if that bank has been nationalised. The law is aimed specifically at oligarch Ihor Kolomoisky, who has been lobbying to have his Privatbank returned, which went bust in 2016 and was nationalised after it became clear Kolomoisky had looted the bank of some $5.5bn.
The second law would create a commercial market for agricultural land that is due to happen in the second half of this year, although analysts are sceptical that the market will appear this year thanks to the economic impact of the coronavirus.
Until these two laws are passed the IMF EFF facility remains in doubt. Moreover, Rada deputies have ignored Ukrainian President Volodymyr Zelenskiy's calls to push the laws through quickly and are about to break up for a three week holiday, citing coronavirus fears as the reason for suspending the activities of Parliament.
Separate to the EFF negotiations Ukraine has applied for funds from the emergency facility established by the IMF, Rapid Coronavirus Financing (RFI), to deal with the stop shock caused by the pandemic. Ukraine is reportedly asking for an additional $4bn from the emergency fund.
If granted then the money will come in very handy, as Ukraine has $4.1bn of debt to repay to the IMF this year as well as about $1bn worth of other debt obligations.
In addition the government was planning to run a UAH90bn ($3.3bn) deficit this year, but the extra spending the pandemic is likely to trigger means the deficit could be twice that amount, which the government will struggle to finance.
Both programmes can be approved by the IMF at the same time, according to the accelerated procedure, and the total amount of the first tranche may total $3bn, one third of which will be used to finance the state budget deficit, reports Ukraine News. A second tranche of between $1.4bn and $2.5bn will follow, according to Ukrainian News.
Ukraine is already running short of funds after the NBU spent circa $2bn in the last week to support the currency as the population began panic-buying dollars. Ukraine’s reserves fell from $26.6bn, which was equivalent to just under four months of imports, but still above the three months minimum economists believe is necessary to keep the national currency stable. The hryvnia has lost some 18% of its value since the start of the year. Part of the IMF disbursement, should it go ahead, will go to replenish foreign exchange reserves as well as to cover budget expenditures.
Ukrainian President Volodymyr Zelenskiy discussed the expansion of the co-operation programme with IMF head Kristalina Georgieva over the weekend, “to support further reforms in Ukraine and overcome the challenges facing the Ukrainian economy in connection with the spread of coronavirus, as well as steps to implement this programme,” according to the President’s office.
“In particular, we are talking about plans to increase the size of Ukraine’s support from the IMF,” Zelenskiy said.
In March, the IMF announced the creation of the RFI, which can provide interest-free assistance to countries that have suffered from coronavirus, up to a total volume of $1tn. One of the first countries to ask for such assistance was Iran, which has not had an IMF deal for more than two generations. Zelenskiy asked the government to launch negotiations with the IMF for RFI funds on March 16.
A basic agreement has already been reached between the government and the IMF to allocate funds and currently only technical issues are being discussed, according to Ukrainian News.
At the same time, in parallel talks the Ukraianian side is asking for the size of the EFF programme to be increased from $5.5bn to $7bn.
The IMF is not charging interest on the RFI funds, nor is it attaching any string other than the insistence that the EFF deal be done first, which will be approved by a fast-track process (no adjustments to budget indicators, which will change and contravene the previous agreements). The size of the state budget deficit this year is expected to rise from the anticipated 2% of GDP to 4%.
Getting the EFF across the finish line remains the main challenge, and the IMF has made it clear that the passage of the banking law is a must for any deal to go ahead.
If the deal is done and approved then the size of the first tranche of the proceeds of finance will be important. Ukraine expects to receive a total of $3bn, of which $2bn will be from the EFF and $1bn from the RFI.
The RFI money will go to cover the budget deficit, as it is unclear if the money from the EFF can be used to support budget spending, which is not normal practice for the IMF.