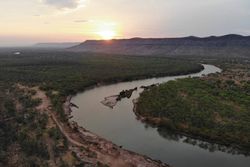 Auvergne Station, near the WA-NT border, is one of three Top End properties bought by a Vietnamese firm.
ABC | 10 March 2020


Vietnamese company buys three cattle stations, with plans to expand into cotton and tourism
By Daniel Fitzgerald
Auvergne Station, near the WA-NT border, is one of three Top End properties bought by a Vietnamese firm.
A Vietnamese agricultural company has settled a deal to buy three Top End cattle stations, covering 732,900 hectares and with 60,000 head of cattle, more than 12 months after a contract was signed.
The Auvergne and Newry Stations, along with Western Australia's Argyle Downs Station, are now in the hands of Clean Agriculture and International Tourism (CAIT), a subsidiary of the Vietnamese-owned TH Group.
The deal to buy the properties — including the land, stock and plant — from Consolidated Pastoral Company (CPC), was worth $130 million when the contract was announced in January 2019.
After approvals from both the Foreign Investment Review Board and the Vietnamese government, one of the biggest Top End land deals in recent history was completed in late January, with most of CPC's workforce continuing with CAIT.
CAIT representative Steve Petty says the company is taking a "slow and steady" approach to developing the properties. (Carmen Brown)
What is Clean Agriculture and International Tourism?
CAIT is controlled by the TH Group — a Vietnamese agricultural company that runs around 45,000 dairy cows, producing around 40 per cent of the country's fresh milk.
The TH Group has rapidly expanded in the past few years, investing heavily in high-tech dairy machinery, and in 2018 put $US630 million towards a milk processing plant in Russia.
TH Group's chairwoman, Thai Huong, has previously been listed by Forbes magazine as one of Asia's most powerful businesswomen.
Kununurra-based Steve Petty is a director of CAIT and the company's representative in Australia.
Dr Petty said the company saw the purchase of the CPC properties as an opportunity to expand into pastoralism, cropping, and tourism.
"It's a move to diversify their international interests into other areas," Dr Petty said.
"They know cattle from their existing dairy business … they see what the potential is in northern Australia, and they are quite excited about what can be done in this area."
Plans to consolidate cattle and develop cropping
While the company has plans to develop cropping on the pastoral properties, Dr Petty said consolidating and developing the cattle business would be the primary focus.
"It is a pretty good base that CPC have left there, and the plan is to build on that foundation," he said.
"[CAIT] will then work to look at opportunities for agriculture that would involve improved pasture, and then into some level of cropping.
"The key place would be Auvergne, where there is a lot of potential.
"But there is a lot of work that needs to be done with the respective agencies for approval before taking that step.
"Further down the track there might be some involvement in tourism but that might be a three or five-year time frame."
In the short term, CAIT aims to focus on growing forage crops such as sorghum, before following the lead of several other Top End stations by looking at cotton.
"There is interest in the cotton area — there is a lot of work going on in the Territory and the Kimberley into opportunities. So they will look closely at that [in the future]," Dr Petty said.
"There is quite a bit of research that still needs to be done in terms of what is going to be economic and what makes sense."
Slow and steady approach to development

Dr Petty said the company was taking a slow and steady approach to the development of the three properties, in consultation with the NT Government.
"The NT Government has, to date, been very supportive of development in these areas but also very focused on what the regulations are, what is permissible, and what the potential environmental impacts or implications of a development [could be]," he said.
"So I think that between the NT Government and the CAIT group, it is going to be an evolution rather than any revolution.
Original source: ABC
TWITTER
FACEBOOK
WHATSAPP
PRINT
E-MAIL
TWITTER
FACEBOOK
WHATSAPP
E-MAIL