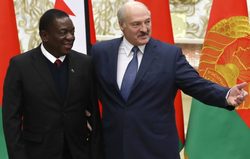 by Nyasha Chingono
President Emmerson Mnangagwa is planning to parcel out vast tracts of prime horticultural land to the Belarusian government in a deal that will see the eastern European nation farming and exporting produce globally while capacitating local farmers, the Zimbabwe Independent has learnt.
Deputy Agriculture minister Vangelis Haritatos confirmed the development in an interview although he said discussions were still in progress.The Belarusians are interested in investing in crop and livestock production, agro-processing, input supply and local manufacturing of farm mechanisation and irrigation equipment.
Apart from engaging in farming, the Belarusians will also enter into joint ventures with local farmers, after the authorities realised that most black farmers who benefitted from the 2000 fast-track land reform programme had failed to produce enough for the country, now considered one of the most food insecure nations, according to the World Food Programme.
The government is battling to contain a devastating food crisis, which is expected to worsen following another poor rainy season. The World Food Programme estimates that a total of 7,7 million Zimbabweans are facing hunger and will need to be assisted with food by as early as next month. These include 5,5 million rural Zimbabweans and 2,2 million urbanites.
Mnangagwa sees the new agriculture investment deal as a solution to hunger which security officials say has become a security threat.A government official told the Independent this week that a contingent of Belarusian officials will arrive in the coming weeks to assess land and “hopefully lock the deal”.
Haritatos said the deal would help improve security.“Their message is clear; they want to help the Republic of Zimbabwe become food and nutrition self-sufficient once again. They want us to produce enough of our own wheat, soya beans, maize, beef, dairy, poultry, and horticulture and export the excess into the region and the world,” Haritatos said.
“The Republic of Belarus has identified Zimbabwe’s need for economic growth and intends to achieve this through financial injection to boost agricultural production of selected commodities to supply our local market, as well as the Belarusian market while activating local agro-industry to enable the exporting of produce into the region.”
Commodities that the Belarusian government potentially wants to promote include wheat, maize, soya beans, beef, dairy, poultry and horticulture.
In September 2019, a high-powered delegation led by the Belarusian chief of presidential affairs, General Victor Sheiman, visited Zimbabwe to follow up on the investment deals, including agriculture.
“When finalisation of an agreement has been made, through joint ventures that will be modelled around the identified specific commodities, Zimbabwe will be further capacitated to produce, process, and market finished products not only for our local market, but also for the Belarusian and regional markets,” Haritatos said.
“No final agreement has been signed yet, although there has been a great deal of correspondence that has been taking place between our ministry and ministry officials from the Republic of Belarus.”
Under the deal, Belarus will provide funding for machinery, equipment and related infrastructure depending on the production, processing and marketing requirements of the commodities.
The Belarusians will also get land for farming exclusively. The eastern Europeans want to engage in horticultural activities on the land with the produce being exported to Belarus and other European markets.
Last year, Mnangagwa visited Belarus, where his government claimed he sealed a number of deals ranging from supply of machinery, and equipment for agriculture, dam construction and mining.
Zimbabwe is also planning a buses deal with the Belarusians where the eastern European country will set up a bus assembling plant.AVM Africa will be involved in assembling the buses after Quest Motors and Deven Engineering lost the bid.
The buses are expected to be handed over to the Zimbabwe United Passenger Company (Zupco).President Emmerson Mnangagwa’s broke government — battling to contain a terrible economic crisis — sees the provision of low-cost public transport as part of a solution to urban transport blues.
The buses deal is among the outstanding deals still to be completed following Mnangagwa’s visit to Belarus last September.
Local Government, Public Works and National Housing minister July Moyo confirmed the bus deal, but declined to give further details.
“The deal is going on well. Of course, it is a business transaction,” Moyo told the Independent.

by Mary-Kate Kahari
Belarus has become the first foreign nation to be allocated virgin land by Zimbabwe, following Mnangagwa’s tour of Eurasia in January 2019, where he established a new economic cooperation with Minsk, centered on agriculture and the supply of agricultural equipment by Belarus to Harare.
According to Belarus Segodnya, a daily newspaper, Belarus has received 10 000 hectares of land for agricultural production in Zimbabwe. The agro-industrial holding run by the Office of Belarus President will begin large-scale production of meat and dairy products in Zimbabwe soon. Experts from Minsk are already now in Harare to select the plots of land, test the soil and identity the type of fertilizers needed. Belarus and its team of investors have indicated an interest to developing the 10 000 hectares of land in the Kanyemba area, Mbire District. Kanyemba is in the province of Mashonaland Central, Zimbabwe, and is located on the south bank of the Zambezi river at the extreme northernmost point of Zimbabwe at the meeting point of the Zimbabwean, Mozambican and Zambian borders.
Furthermore, the Belarusians plan to build a state of the art dairy farm in Zimbabwe for an initial 1000 cows by the end of 2020. The cattle will be partially brought from New Zealand, and simultaneously, a meat and milk processing line will be launched. Zimbabwe used to produce about 260 million litres of milk in the early 1990s, but the figure has dropped to only 70 million litres of raw milk in recent times against a national demand of 120 million litres.
In May last year, Belarus also pledged to supply Zimbabwe with 474 tractors. Mnangagwa’s government in the same month said it is expecting a delivery of 1 674 tractors (including those from Belarus) in the next three months from foreign manufacturers as part of efforts to mechanise agriculture and boost productivity. The tractors are expected to benefit smallholder and large-scale farmers.
Original source: Independent
TWITTER
FACEBOOK
WHATSAPP
PRINT
E-MAIL
TWITTER
FACEBOOK
WHATSAPP
E-MAIL