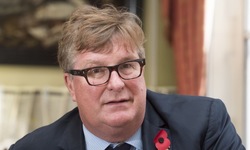 Crispin Odey has donated at least £1.7m to the Tories and the pro-Brexit campaign in the last decade. (Photo: Rex/Shutterstock)
Guardian | 3 March 2020

by Fiona Harvey
Crispin Odey, one of the biggest donors to Boris Johnson’s Conservative party, has invested in a Brazilian company linked to deforestation in the Amazon, the Guardian can reveal.
SLC Agricola has been accused of clearing land for soy cultivation, mostly from the Cerrado ecosystem in Brazil, which is rich in wildlife and plant species and is an important carbon sink. It has requested licences to clear thousands of hectares of Cerrado land, on top of at least 30,000 hectares that it cleared between 2011 and 2017, which resulted in the Norwegian government pension fund divesting from the group.
Though the company has government licences for the Cerrado land it is clearing and does not regard this clearance as deforestation, such clearances are controversial. Jair Bolsonaro’s government has drawn widespread criticism for allowing land to be cleared and burned in the Amazon and elsewhere in Brazil.
Advertisement
Chain Reaction Research, which provides sustainable investment advice, has said SLC Agricola’s “planned deforestation and lack of zero-deforestation commitment exposes the company to a number of business risks [and] could raise concerns with equity investors”.
Odey Asset Management donated £10,000 to Johnson for his leadership bid and has donated at least £1.7m to the Tories and the pro-Brexit campaign in the last decade. The company is understood to have a sizeable stake in SLC Agricola.
Alasdair Cameron, an investigator at Friends of the Earth, said: “While Johnson talks of protecting and restoring the world’s ecosystems, he and his party gladly accepted donations from an investor profiting from the destruction of Brazilian forests.
“The burning of tropical forests is not accidental – it is driven by the demand for soy, beef and other commodities. In the run-up to Cop26, it is worrying to see that the cosy relationship between environmentally destructive industries and UK politics is still going on.”
A spokesperson for Odey Asset Management told the Guardian: “As active fund managers, we seek to invest in companies that we determine have a promising future, and one of the inputs to that evaluation is how those companies are using or adopting sustainable practices.
“Brazil has formed a vital part of increased global agricultural output, that has allowed food to be cheaper in real terms than ever before, and enabled a growing global population to feed and clothe itself. SLC Agricola is a good corporate citizen that abides by relevant legislation and adopts the most modern agricultural technology to maximise yield and use land efficiently.”
SLC Agricola said it had not deforested without licences and did not have a zero-deforestation policy. The company said it had converted 1,500 hectares of land to farming in the three years from 2017 to 2019, all of which was Cerrado land. The company said its current strategy was focused not on “the acquisition of raw land for conversion, as was the case in the past,” but on already developed areas and leased instead of owned land.
A spokesman said: “We are in full compliance with the Brazilian forestry code, which requires us to preserve 30% of our owned land. Also, we do not have interest in planting in the Amazon, and we believe it should be preserved. There are still huge amounts of degraded pasture land to be converted into farming, and not even that will be necessary. Farming yields have been going up due to technology, which requires less and less land to produce the same amount of food.”