South Korean trading giant to compensate for past deforestation in Papua 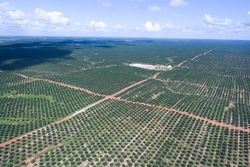 
South Korean trading giant to compensate for past deforestation in Papua
Posco International’s new zero deforestation policy comes after years of pressure from NGOs and the divestment of its shares by Dutch and Norwegian pension funds. Activists say remediation is critical as most of the company’s concession area in the biodiverse region has been cleared.

By Neo Chai Chin
South Korea’s largest trading company, which has been called out for destroying nearly 15,000 hectares of primary forest in Indonesia’s Papua region, has released a zero deforestation policy and pledged to compensate for some areas that were cleared.
Posco International, which has 34,000 hectares of palm oil plantations in Papua and produced about 80,000 tonnes of palm oil last year, will also require third-party suppliers to observe its No Deforestation, No Peatland, No Exploitation (NDPE) policy.
The company’s policy, published on its website, came after years of pressure from non-governmental organisations and the divestment of its shares by Dutch and Norwegian pension funds.
The new policy has been welcomed by campaign group Mighty Earth, which provided input for the draft version of Posco International’s NDPE policy.
‘Remediation is critical’
Mighty Earth’s senior campaign director Deborah Lapidus said Posco International’s pledge to “compensate for its legacy of forest destruction” is still rare in the industry and an encouraging sign.
“Given that most of the concession area has already been cleared, it is critical that the company genuinely remediates for the impacts of its deforestation,” she said. “It must also prioritise responding to the concerns raised by affected local communities, including issues of land rights and water pollution.”
Environmental activists have, for years, raised alarm over the clearance of Papua’s forests for palm oil, timber and other activities. Papua is home to about half of Indonesia’s biodiversity and has the country’s largest area of remaining primary tropical rainforests. Its endemic animals include tree kangaroos and birds-of-paradise.
According to Mighty Earth’s analysis, in 2011, before Posco International’s subsidiary PT Bio Inti Agrindo began developing its concession in Papua, over half of the area—about 19,000 hectares—was covered by primary forest.
Between 2012 and 2018, nearly 80 per cent of the concession area was cleared and over half of it—comprising nearly 15,000 hectares—was primary forest.
Posco International, which started out at Daewoo Corporation in 1967, is involved in trade, resources development, production and infrastructure development. Its operating income in 2018 was 472.6 billion South Korean won (US$0.4 billion).
What’s in Posco’s NDPE policy?

Under its new palm oil policy, it will not develop plantations on peatlands and areas with high conservation value (HCV) and high carbon stock. By the fourth quarter of this year, it will develop forest restoration or conservation plans for areas outside its current concession areas, to make up for deforestation it wrought before October 2017—when the company suspended all forest clearance in its Papua palm oil operations.
The size of this area was not revealed. But Posco International said Bio Inti Agrindo, a Roundtable on Sustainable Palm Oil (RSPO) member, will be updating its RSPO land use change analysis and liability assessment by the first half of this year.
It will publish progress reports every six months and come up with a sustainability dashboard and credible grievance mechanism.
Remediation and compensation a complex topic
Lapidus said there is no one-size-fits-all approach to remediation and compensation. When it is not feasible to restore the site, companies can invest in restoration or conservation of an area elsewhere, she said, adding that Mighty Earth would like companies to restore an area 10 times what was destroyed.
The cost and duration of remediation and compensation is very complex and seems to vary significantly case by case, Lapidus said.
The RSPO has a standardised way of calculating a company’s liability for past HCV forest clearance under its Remediation and Compensation Procedure. Two options are for a company to undertake the project itself or engage a third party, or fund a project outside the areas it manages to a tune of US$2,500 per hectare per year for 25 years.
For the latter option, the area must be of a similar scale to that of the native vegetation lost to plantation, of a broadly similar type, and within the same geographic region, an RSPO spokesperson told Eco-Business.
Compensation liabilities are determined using a matrix, she said. The matrix combines vegetation coefficients as proxies for HCVs, the land clearance period, membership status and areas requiring environmental remediation. The final compensation liability is expressed in hectares.
Palm oil businesses that have made restoration pledges include Gama, Cargill and Eagle High, Lapidus said. Gama has agreed to restore about 11,000 hectares, includes 1,600 hectares on peatland. Cargill and Eagle High are investing in conservation projects through conservation finance facilitator Lestari Capital’s Sustainable Commodities Conservation Mechanism fund.
Other agri players that, according to environmentalists, have destroyed Papua’s forests include Korindo, the largest palm oil company in Papua. An August 2016  report highlighting its destructive practices in Papua and North Maluku was commissioned by environmental and indigenous rights groups Mighty Earth, the Korean Federation for Environmental Movements, SKP-KAMe and PUSAKA.
Controlled by South Korea’s Seung family, Korindo has about 149,000 hectares of land in Papua and was cut off by major customers Wilmar and Musim Mas in recent years over its deforestation and other practices.
Korindo’s website states various commitments such as zero burning and being Indonesia Sustainable Palm Oil (ISPO)-certified, but it is not an RSPO member and does not have a comprehensive NDPE policy.
Lapidus said Mighty Earth’s hope is that Korindo and Posco International would jointly restore severely damaged waterways in the region, conserve large tracts of forest at the landscape level and compensate communities for lost land, livelihoods and underpayment of timber and other natural resources.
Meanwhile, Indonesia’s Coordinating Maritime Affairs and Investment Minister Luhut Pandjaitan told CNN Indonesia last month that it would halt new oil palm plantations in Papua, but activists are sceptical of his latest declaration, given his defense of the palm oil industry in the past.