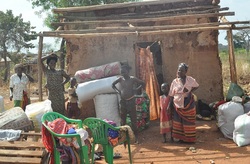 
Open letter to halt land evictions by agribusiness companies in Kiryandongo District.
Dear ambassadors of the UK, US and the Netherlands in Uganda,
We, the undersigned, call upon your governments, as financiers and/or supporters of the company Agilis Partners to investigate the growing humanitarian crisis in Kiryandongo district, Uganda, where thousands of families have been violently and forcefully evicted without compensation to make way for the company’s agricultural activities. More than 30,000 families face a forced eviction from their lands in Kiryandongo district, Uganda if action is not immediately taken to stop it.
Sign the Kiryandongo Land Evictions Petition
We are also concerned about the deteriorating living conditions of some families still on the land whom the evictors and their agents have blocked from accessing their homes and gardens without justifiable compensation.
The land measures approximately 9,500 acres and has been lawfully occupied by more than 30,000 families since 1937. The families use these lands to cultivate various crops such as simsim, soya, maize, banana, sugarcane and coffee.
Some cases of human rights abuse and violation committed against the villagers include: use of excessive force against unarmed communities; illegal arrest and detention; harassment; intimidation; demolition of schools, worship centers and houses; cutting down people’s gardens and crops; as well as unlawful and forced payment which is contrary to the lawful procedures and practices regarding the compensation of any lawful occupants as prescribed by the national laws and international mechanisms. Below are some of incidents that have been recorded.
1) On November 11 2016, without a court order allowing the company to evict thousands of families, the company and its agents used live ammunitions to shoot two people including an 11-year old school boy, Ssewankambo Ponsiano, and tear-gassed pupils of Kabyanga Primary School while in their classrooms. This incident occurred at Kisalanda village, Kimogola Local council One (1). According to medical reports, the gun shot caused a permanent disability to Ssewankambo and he has since dropped out school.
2) Since December 2017, the companies and their agents have demolished over six schools namely, RCC Nursery and Primary School, Bright Future Nursery and Primary School, Good Hope Nursery and Primary School, Aloko Nursery and Primary School, Kololo Nursery and Primary School and God’s Grace Nursery and Primary School. Since the violent eviction started to give way for investments, over 2500 pupils have dropped out of school due to the long distances to a nearby government school. The nearest school from their village is 10 kilometers and above according to the parents.
3) Over 17 community land and environmental defenders that were mobilising fellow villagers to demand for a lawful process and procedure to be followed before evictions have been illegally arrested, detained and charged with trumped-up charges including trespass. The majority are still reporting on police bond at Kiryandongo police station. Akiteng Stella, a women’s league leader was illegally arrested and detained for seven days without appearing before court. Ms. Akiteng claims that while in a police cell, she was denied access to water and the bathroom, toilet, and medical attention.
4) Destruction of a sense of belonging, indigenous knowledge and local economy: The companies have destroyed homes, small businesses like retail shops, maize stores for some businessmen, and gardens that have been a source of people’s daily income to meet school fees, medical bills and other basic needs. The company has refused to carry out a lawful valuation of the properties on the land and to provide adequate compensation. Instead, policemen and soldiers have been hired by the company to force people including the aged ones to receive whatever payments they are making as compensation at gunpoint, after which the local villagers are given three days to vacate the land.
A family of Ssenkware Godfrey born in 1936 and his wife Asaba Margaret aged 68 with their 11 children at Tecwa village, have 10 acres of land. This land has been used to grow cassava, maize, beans, and banana to feed the family and meet other basic needs. One of the company’s agents paid this family UGX 1,577,500 equivalent to US $ 439 to vacate their land and start a new life elsewhere. Here attached are some of the photo evidences.
We call on the governments involved in supporting Agilis Partners to investigate these allegations and take actions against the company for aiding or facilitating land related abuses and violations.
Those known to be involved in funding, financing or supporting Agilis Partners and its company Joseph Initiatives include:
-The impact investor DOB Equity (dob Foundation) of the Netherlands, via the UK-based Dutck Oak Tree Foundation, owned by the De Rijcke family of the Netherlands.
-The United Nation’s Common Fund for Commodities, via the Dutch Trust Fund arrangement set up by the Netherlands Ministry for Development Cooperation
-The UK’s Department for International Development (DFID) via its FoodTrade programme
-USAID via its Ugandan country programmes.
We call on your governments to take immediate action to halt the eviction of the villagers in Kiryandongo district to avoid a further escalation of the humanitarian crisis. 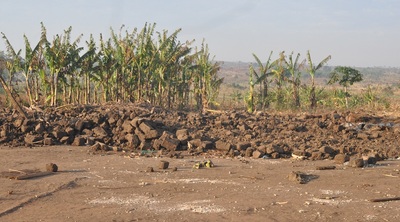