Fractionalization comes to the market for US farmland 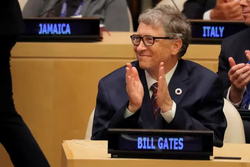 Entities like the Bill and Melinda Gates Foundation are directing large commitments to the farmland space, Investable Universe asserts

Fractionalization comes to the market for U.S. farmland

Slicing (and securitizing) the breadbasket: for the roughly 40% of the $3 trillion in U.S. farmland owned by non-farmers, acreage is an investment. And historically, it’s been a shrewd one: impressive, largely unlevered returns and low enough correlations to traditional assets like stocks and bonds have made farmland a stalwart portfolio diversifier.

But new venture capital-funded platform, AcreTrader, is looking to change that dynamic, by making farm investment more broadly accessible to investment through fractional ownership. In the process, they hope not only to widen the field in farmland investment, but to address mounting capital access needs for U.S. farmers at a time of shifting farm demographics and changing economics.

“Farming is a tough business,” says AcreTrader founder and CEO Carter Malloy. “It always has been. Look at any major sector of the economy over the last 100 years. Competition has driven down margins in just about everything but software, and now that’s happening too. Farmland is no different.

“Commodity prices—especially in the past five years—have pinched margins for farmers, so we’ve got to continue to innovate and adopt technology at a more rapid pace and then grow economies of scale: farm more and more land.”

Carter Malloy has lived on both sides of the proverbial fence. Born and raised on an Arkansas farm, Malloy went on to work for more than a decade at a long-short equity hedge fund in San Francisco while dabbling in land investment on the side. Experiencing for himself the lack of a centralized, technology-enabled platform for independent investors to buy land became the impetus behind AcreTrader, which he returned to Arkansas to launch in 2018.

Beyond the technology friction factor, Malloy wanted to address built-in barriers in the existing avenues for farmland investment as well.

Direct ownership—as most U.S. farms are still held—is, in Malloy’s formulation, a “non-starter” for city-dwellers or absentee owners, even those with the liquidity to plunk down a million dollars or more to acquire land outright. Private equity is another option, but large minimum financial commitments and long-term lockups are prohibitive to most retail investors. Finally, there are publicly traded farmland REITs, which are relatively liquid but more correlated to equities, making them less effective diversifiers.

“For us, non-correlation is what’s exciting about farmland,” Malloy says. “We want to get away from other asset classes, and certainly the volatility of the stock market. It’s the reality of being in public markets, and thus why we came along.”

Essentially, AcreTrader functions like a distributed landlord, which sources, evaluates and buys farms in selected U.S. markets, and rents them back to farmers on behalf of a pool of investors. Deep, on-the-ground intelligence in farm communities, and with local farm managers, is core to the firm’s value proposition.

According to Malloy, most U.S. farm lease contracts are verbal and yet still legally enforceable. Despite the prevalence of so many “handshake” contracts, his team has found lease terminations to be a generally rare occurrence due to the “hyperlocal” nature of community farming; default and vacancy rates on well-managed farms have also been low.

Identifying well managed farms—especially in the absence of official industry benchmarks—is where it’s at.

AcreTrader performs rigorous, multi-phase due diligence on every farm prior to acquisition. According to its own figures, the firm accepts less than 1% of the land parcels it reviews. Farm assets that do make the cut are placed into a single LLC, and investors buy shares, typically sized between 5,000-20,000 units, in that LLC, with a minimum lockup of one year for a farm investment with a finite timeline of 3-5 years.

During the investment period, investors receive a share of the cash rent paid out as distributions, and may also benefit from land value appreciation if the property is sold during that period.

While Malloy says he never anticipates a “day trader’s” market to develop in farmland, AcreTrader anticipates a liquid secondary market for trading farmland parcels over the next 12 months, assuming the associated legal and technical hoops are cleared. By that time, AcreTrader hopes to be active in 10-12 U.S. states as the firm cautiously expands.

Per Malloy, identifying successful farms comes down to three primary considerations: soil, water and financial profile. Soil quality has to be high enough to allow for crop-agnostic farming, so that if one crop goes out of favor, the farm can pivot to another. Long-term sustainable access to water—and holding associated water rights—is also critical. Finally, there’s the farm’s valuation, its pricing on comparable and cap-rate bases, as well as intangible factors like farmer sustainability and lease structures.

In addition to accredited retail investors, AcreTrader has also increasingly begun working with institutional investors and family offices seeking to increase farmland allocations. The trend has been in force in recent years, with entities like the Bill and Melinda Gates Foundation directing large commitments to the space.

A specific scenario in which the AcreTrader model hopes to demonstrate value is in the emerging market for U.S. farmers transitioning from conventional to certified organic farmland.

According to Malloy, two aspects of transitioning farmland are attractive to investors. The first is better rent. Farmers can earn $600-800 in gross revenue farming row crops like soybeans and corn. After three years of transitioning to organic soil, the same acre can yield upwards of $1000 in revenue, making a meaningful impact on a farm’s business economics through higher rent and land value.

Ultimately, Malloy says, the near-term future of U.S. farming is one in which venture capital, private equity, greater securitization will inevitably play a greater role in rural communities.

“We absolutely see an evolution and a necessary one in capital formation in the world of farming,” he says. “It’s critical. The sector as a whole is the least digitized sector of the U.S. economy.”

”Farmers’ number one constraint is access to capital and we want to be a part of the trend that helps with that,” he says.