Action alert! Immediate release of villagers in the DR Congo imprisoned on false charges related to a land conflict with Feronia Inc. 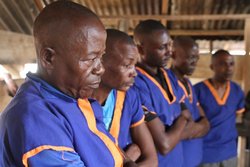 Please, sign the letter by Friday, 14 February. The letter with the full list of signatures will be released on 17 February, the day before the second scheduled court hearing of the five villagers who remain in jail since September 2019.
Five villagers from the communities of Yalifombo and Lokumete, in Tshopo province, DR Congo, have been held in prison in the provincial capital of Kisangani since September 2019 on spurious charges stemming from a land conflict with the Canadian oil palm plantation company Feronia Inc. The British development bank CDC Group holds over 40% of Feronia’s shares, while other European development banks, including Dutch FMO, German DEG, French Proparco and Belgian BIO have indirect equity stakes in Feronia or outstanding loans with the company’s subsidiary, Plantations et Huileries du Congo, PHC.
The five villagers and nine other were arrested by police in the middle of the night in early September 2019 without being informed of what they were being charged with.(1) Eight of them were subsequently transferred to a prison in Kisangani. After a few days in prison, three of the villagers were released without charges, after having paid a $500 fine to a courthouse clerk. The remaining five villagers, among them the chef de village of Yalifombo, had their first tribunal hearing nearly five months later, on January 28, 2020. Only at this hearing were they informed that they were being accused of causing damages to Feronia’s property and physical injury to a Feronia staff member.
The charges relate allegedly to an incident that occurred in June 2019 when villagers from Yalifombo confronted Feronia’s management for having improperly disposed of toxic waste in their territory. Shortly after Feronia-PHC dumped this waste, numerous villagers became sick and several people died after developing unusually strong diarrhea. After the incident, conversations between Feronia and the villagers took place, and the company agreed to remove the waste and comply with a social agreement that the two sides had signed in November 2018. As part of the social agreement, Feronia agreed to construct a school, a health clinic and a bore hole before planting oil palms on an area of community lands to supply a mill that the company was constructing in Lokumete, only a few kilometers away from the village of Yalifombo. In early September, during a ceremony to inaugurate Feronia’s planting programme, the local village leadership reminded the company of its overdue commitments. That evening, the police, arriving in Feronia vehicles, moved in to arrest the villagers.
No credible evidence was presented at the January 28, 2020 hearing that could connect the five villagers to any criminal actions. Rather, it was apparent that three of them had been targeted because they are leaders who are outspoken in demanding that Feronia comply with its commitments under the social agreement with the community. The other two villagers were arrested for reasons completely unrelated to what they were being charged with. One was simply accompanying those who were arrested as a police witness in order to inform the community where their leaders were being taken and what they were accused of, while the other was arrested by the police when he refused to let them search his house after the police accused him of hiding an opponent of the company.
A lawyer linked to Feronia-PHC was present at the January hearing but did not have the proper documents to intervene, and the court moved to postpone the case until February 18, 2020. A bail of USD$1000 was set for the five villagers, which they could not pay, and thus they continue to be held in jail.
These five villagers have been detained in deplorable conditions at the Kisangani prison for over five months now. They are detained 300km from home, unable to communicate with their families. There is no justification for their ongoing detention or for the charges that have been brought against them. This is clearly a case of Feronia Inc abusing of its power to intimidate villagers who dare challenge the company’s interests. The level of repression directed against villagers has escalated since Yalifombo and eight other villages filed a complaint with the German development bank (DEG) for a mediation process to resolve their long standing land conflicts with the company.(2) There are reports that an offer was made to withdraw the charges against the five villagers if the Yalifombo community withdraws from the complaint process.(3)
We, the undersigned organisations, call for the courts in the DR Congo to dismiss all charges against the villagers and to immediately release them from prison.
We also call on the European development banks, and the UK’s CDC Group in particular, to stop standing by as their client intimidates villagers who demand no more than the company stop taking their customary land and comply with its social agreement obligations. These banks are failing to live up to their responsibility. They must demand that their client immediately and unconditionally drop any charges against the five villagers. They must also ensure that Feronia, which is largely controlled by European development banks, commits to good faith negotiations as part of the DEG mediation process.
(1) https://www.farmlandgrab.org/post/view/29157
(2) https://www.farmlandgrab.org/post/view/28667
(3) https://congoaujourlejour.blogspot.com/2020/02/pret-payer-1000-au-tribunal-pour.html