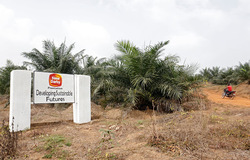 A spokesperson for Malaysian palm oil giant, Sime Darby, who labelled NGO critics as ‘toxic entities’ and called on the government to suppress them, has sparked fury among civil society groups all around the tropics. At a meeting held in Kota Kinabalu, the capital of Sabah (North Borneo) this week, indigenous peoples, and youth, environmental justice, labour and human rights organisations issued a joint https://www.forestpeoples.org/sites/default/files/documents/The%20Kota%20Kinabalu%20Statement%20on%20Palm%20Oil%20and%20Freedom%20of%20Expression.pdf">Statement condemning such comments and demanding freedom of expression.
The meeting, which included NGO members of the Roundtable on Sustainable Palm Oil (RSPO), and was attended by groups from South and Central America, West and Central Africa and South East Asia had been organised ‘ to explore potential reforms in our countries and the industry internationally so that palm oil production brings genuine development and not exploitation, deforestation, land-grabbing and impoverishment’.
Companies that are members of the RSPO, which includes Sime Darby, are expected to uphold ‘multi-stakeholder’ decision-making, respect human rights and avoid deforestation and exploitation. Freedom of speech and the right to protest are cornerstones of democracy and so attempts by an RSPO member to muzzle indigenous peoples’ and civil society voices has brought a wave of condemnation.The meeting was supported by Bothends and the Forest Peoples Programme.


Malaysian palm oil bosses urge action against 'toxic' environment groups
By A. Ananthalakshmi and Mei Mei Chu
KUALA LUMPUR, Feb 4 (Reuters) - Malaysian palm oil industry officials on Tuesday urged the government to take action against environmental groups critical of the commodity, with one executive calling them “toxic entities”.
The cultivation of palm oil, which is used in everything from ice cream to lipstick, is blamed for large scale deforestation in Southeast Asia and for endangering wildlife, such as orangutans and pygmy elephants. Indonesia and Malaysia are the top two producers of palm oil.
Environmental groups, especially in Europe, have called on growers to be more sustainable and the European Union last year legislated to phase out palm oil use in renewable fuel by 2030 because of concerns about deforestation.
Franki Anthony Dass, chief advisor and value officer at Sime Darby Plantation - the world’s biggest palm oil company by land size - said non-governmental organisations (NGOs) were orchestrating attacks on palm oil.
“If they are so unfriendly, why allow them to be in our countries Malaysia and Indonesia,” he said at an industry forum in Kuala Lumpur. “We have the right to control this and do something drastic for once.”
Franki said the industry has made great strides in meeting sustainability standards, but the NGOs often changed their demands.
His comments followed a question from Yusof Basiron, executive director of the Council of Palm Oil Producing Countries, who asked Malaysian government officials on a panel if they would take any action against the NGOs. He called the NGOs “toxic entities” for their stance on palm oil.
Shamsul Iskandar Mohd Akin, the deputy minister in charge of the palm oil portfolio, said his ministry will promote the message of sustainability in the industry.
Another ministry official said the government was not looking to sideline NGOs and would work with them to address their concerns.
Malaysia and Indonesia have hit back against the criticism and have vowed to set up a joint fund to counter critics.
Last week, Indonesia’s environment and forestry ministry said it had ended a 25-year conservation agreement with the WWF conservation body because the group allowed a forest where it operated to burn. A ministry official also criticised a WWF social media campaign that criticised the government over forest fires.
A U.S. journalist, who has written stories about environmental destruction in Indonesia, was deported last week after being arrested over alleged visa violations. (Reporting by A. Ananthalakshmi and Mei Mei Chu; editing by Barbara Lewis)