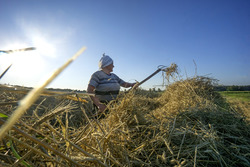 
EU to send EUR 10 mln for land reform as part of grant support of agriculture development in Ukraine
The grant support of the European Union (EU) for the development of agriculture and small-sized farms in Ukraine envisages EUR 26 million, including EUR 10 million will be sent to implement the land reform.
According to the documents to the agreement, which are available at Interfax-Ukraine, it is planned to allocate EUR 8 million for reform in the field of rural development, and EUR 7.5 million for support of small farms. The remaining EUR 0.5 million is planned to be spent on audit, inspection expenses and information interaction, as well as ensuring publicity.
Support for land reform under the agreement will be carried out under the indirect management of the World Bank.
The implementation period of the agreement is 108 months from the date of its entry into force.
As reported, the government of Ukraine and the European Commission signed an agreement on support for the development of agriculture and small farming in Ukraine in the amount of EUR 26 million in Brussels on January 28.