Agribusiness as usual: Agricultural technology and the Israeli occupation 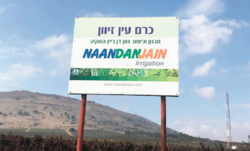 Agribusiness as usual: Agricultural technology and the Israeli occupation
In this report, Who Profits shows that Israeli agritech companies are deeply complicit in the ongoing occupation of Palestinian and Syrian land. The report exposes the contribution of agritech firms to agriculture in illegal settlements and examines their role in the Israeli blockade of Gaza. It investigates the reciprocal ties that exist between the Israeli agritech and military industries and highlights the economic gains made by Israeli agritech industries through their collaboration with the Israeli military apparatus.
Irrigating fields, protecting crops and providing technical support to farmers are generally regarded as benign, even positive, activities. Yet as this report demonstrates, in the context of Israel’s prolonged military occupation of Palestinian and Syrian territory, such activities acquire a regressive political character and become implicated in structures of repression, land grab and rights violations.
Unlike agriculture, which physically appropriates land and resources, agricultural technology (agritech) forms a largely invisible layer in the ongoing process of dispossession through agricultural land grab in the occupied West Bank and Syrian Golan. Rarely discernible to the naked eye, irrigation pipes, fertilizers and herbicides and agronomic technical assistance nonetheless play a crucial part in sustaining illegal settlement agriculture.
Moreover, while the use of the occupied Palestinian territory and its captive population as a laboratory for military and crowd control technologies is well documented, this report demonstrates that the framework of occupation also provides the civilian agritech sector with a testing ground for the development of products and technologies.
Through their participation in agricultural experiments conducted by settlement Research and Development (R&D) centers, major agritech corporations such as Israel Chemicals and Netafim are able to use occupied land as a laboratory for the testing of products.
Furthermore, Israeli and international agritech firms increasingly collaborate with Israeli military and security corporations to extend the commercialization of occupation-generated know-how well beyond the purview of security markets. Collaborations include the adaptation of the Iron Dome command and control system for smart irrigation as well as the use of Israel Aerospace Industries (IAI) military drones for large scale precision agriculture. Such partnerships enable Israeli military corporations to penetrate new markets while positioning a sanitized version of their repressive technologies, developed in the context of a prolonged military occupation, as part of the effort to combat the global crises of climate change and food insecurity.
This report examines the Israeli agritech industry and R&D activity in occupied territory and exposes the complicity of Israeli and international corporations in settlement agricultural production. It also presents the use of herbicide spraying against Palestinian farmers in the besieged Gaza Strip. Finally, it investigates commercial agritech applications of military technology, focusing on four recent case studies.