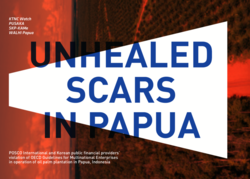 The complaint concerns POSCO International, the controlling owner, and the NPS and KEXIM, the financers of POSCO International. The complaint is related to the adverse impacts caused by the operation of the palm oil company PT. Bio Inti Agrindo (PT. BIA), a subsidiary of POSCO International in Papua, Indonesia. The adverse impacts include large-scale deforestation of tropical rainforest and loss of biodiversity; failure to implement Free, Prior and Informed Consent (FPIC) with the customary owners of the land in the process of developing the plantation; and violation of local residents’ right to water by degrading the Bian River water quality.

The complaint is supported by evidence of misconduct by PT. BIA, which is owned by POSCO International. POSCO International has not addressed the deforestation carried out by PT. BIA or put in place policies to prevent further deforestation. Allegations were repeatedly made in regard to violation of the right to Free, Prior and Informed Consent (FPIC), but POSCO International failed to provide a proper remedy to stakeholders. Due to the degradation of the water quality of the Bian River, local residents can no longer use the water from the river for their daily activities or drinking. However, no measures were taken to ensure that the right to water of the local residents is protected.

Meanwhile, the Guidelines require the corporations to seek to prevent or mitigate adverse human rights impacts directly linked to financial services by a business relationship. NPS, as an institutional shareholder of POSCO International, should engage with the investee companies damaging shareholder value, but NPS has failed to meaningfully engage with POSCO International despite its awareness on the adverse impacts. KEXIM also failed to review the reasonably foreseeable risk in the palm oil industry when it decided to provide the loans to POSCO International’s subsidiary in Papua.

The Norwegian Government Pension Fund and the Dutch pension fund ABP have divested from POSCO International on the grounds of deforestation, and the Korean media has covered the relevant issues in relation to PT. BIA’s operation. Despite this the NPS continues to hold a more than five percent share in POSCO International, and KEXIM has provided loans for PT. BIA’s operations.

Y.L. Franky, the Director of Yayasan Pusaka stated, “The palm oil industry creates many difficulties for the indigenous people of Papua. The forest they have depended on is disappearing and social conflicts due to land disputes are on the increase.” Pastor Anselmus Amo, the Director of SKP KAMe reiterated that the local residents have suffered since PT. BIA began operating the plantation and further explained, “Daily life has been made particularly difficult for local residents by the now polluted river water. However, local residents do not know where to go to raise these issues.” Shin Young Chung, KTNC Watch lawyer also pointed out, “Well-known pension funds have withdrawn their investments, and public financial institutions in Korea should also adopt policies to consider environmental and social impacts of the business.” She hopes the NCP will make a decision that will bring actual change to the behaviour of POSCO International and the financers.

The complainants request that the Korean NCP facilitate dialogue to persuade POSCO International to acknowledge the deforestation they have caused and provide the remediation. They also call on POSCO International to adopt and publish a comprehensive group-wide cross-commodity No Deforestation, No Peat, and No Exploitation (NDPE) policy to prevent further damages. It is also requested that POSCO International implement FPIC in their operation and ensure the right to water of the local communities relying on the Bian River.

They also request that the NPS engage with POSCO International to use their leverage and consider deforestation and infringement of the rights of indigenous people in their policies for socially responsible investment. The complainants request KEXIM to adopt policies for reviewing environmental and social risks in developing natural resources overseas and refrain from providing further loans to support PT. BIA’s operations that are causing adverse impacts.

For more information or interview requests you can contact: