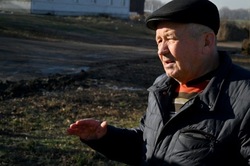 Sergiy Plaksya is one of many medium-sized Ukrainian farmers who fears that allowing the sale of land will mean they will lose out to oligarchs (Photo: AFP)
RFI | 27 December 2019


Ukraine farmers fear for livelihoods as president backs land sales
For decades, farmer Sergiy Plaksya has been growing grain and vegetables, cultivating swathes of land that he rents from local residents in the countryside near Kiev.
Now 72-year-old Plaksya, who runs a 2,500-hectare (1,010-acre) family farm with his wife, three sons and more than 100 workers, fears he could lose everything if the government lifts a ban on the sale of farmland.
President Volodymyr Zelensky, who was elected this spring on promises to implement long-awaited economic reforms, wants to open up the sale of the country's fertile farmland from next year, despite fierce protests.
A bill calling for land sales to begin in October 2020 won initial backing in November from the parliament dominated by Zelensky's Servant of the People party.
But its progress has stalled as opposition MPs have submitted large numbers of amendments.
"Land sales are needed, but they should be (introduced) in such a way that everyone is protected," Plaksya told AFP at his farm in the village of Kalynivka outside Kiev.
Known as the "bread basket of Europe," the former Soviet country has around 32.5 million hectares of arable land, almost twice as much as France.
Currently some farmland is state-owned but much is made up of small, individually-owned plots. Privatised after the breakup of the Soviet Union, these are currently illegal to sell.
Western donors to Ukraine are demanding it implement reforms to spur its stalling economy.
The country is rich in fertile black soil and opening up such land for sale could boost GDP by 1.5 percent, the World Bank said last month.
While the reform is expected to foster economic growth, its critics fear it will allow rich Ukrainians to create giant holdings of land that they are currently renting, while small-holders will be shut out.
"The threat is that we have many oligarchs who today are cultivating 20,000 to 30,000 hectares of land. And they will snap up this land!" Plaksya lamented.
Others fear a plan to allow foreigners to buy farmland at a later stage.
- 'Crime against people' -
To appease small- and medium-sized farmers, the government has promised loans at reasonable rates, but farmers said this will not be sufficient.
"I'll only be able to buy 40 to 50 hectares, no more," Plaksya said.
The farmers also warned that the lack of protection for property rights and weak judicial system mean they will be vulnerable to attempts by big landlords to take over their land.
"Land should be free to sell," said another farmer, Anatoliy Kovbel, who farms on around 35 hectares in the central Dnipropetrovsk region.
But he said he doubted the reform would be implemented properly amid widespread corruption.
"With our corrupt police, with our corrupt courts, selling land is a crime against the people," he argued.
While voicing concerns, none of the farmers interviewed by AFP said they opposed the reform in any form.
But some opposition politicians are demanding that the authorities completely abandon the plan.
- Rocks and tear gas -
Former prime minister Yuliya Tymoshenko this month urged supporters of her populist Fatherland party to take to the streets to "stop this scenario that goes against the people."
Last week, a series of thousand-strong rallies climaxed in clashes in Kiev where nationalist militants joined Tymoshenko's supporters and farmers.
Police fired teargas at protesters who hurled rocks and bricks, and 25 people were injured.
The government initially planned to allow foreigners to buy farmland from 2024, but Zelensky, under pressure from opponents, has promised a referendum on this.
Last week, the president visited a village near Kiev and promised farmers further concessions.
He offered to reduce the maximum amount of land that one person can buy from 200,000 to 10,000 hectares.
The latest opinion polls show that between half and two-thirds of Ukrainians oppose the reforms.
"Some things are irrational. (For many) land is like a mother, you can't sell it as this would be like selling your motherland," said sociologist Iryna Bekeshkina.