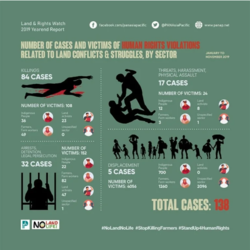 
Human Rights Day 2019: Land-related killings go up
Press Release
PENANG, Malaysia – Killings of farmers, farm workers, indigenous people and land rights activists worsened in 2019. Perpetrators were either unidentified assailants or from state forces.
This was among the findings of the Land & Rights Watch 2019 yearend report by regional advocacy group PAN Asia Pacific (PANAP), released today to mark the International Human Rights Day. (Download the full report here.)
PANAP monitored a total of 108 victims in 84 cases of killings related to land conflicts and struggles in 14 countries from January to November 2019.
Almost 67% of the victims in 2019 were killed by unknown assailants, significantly higher than the 44% recorded last year. That the attackers were not identified poses additional challenges to the quest for justice for the victims and their families as it means that the perpetrators likely continue to roam free and remain unaccountable for their crimes.
Based on PANAP’s monitoring, the killings were concentrated in the Philippines (38 cases, 50 victims); Colombia (21 cases, 27 victims); and Brazil (seven cases, nine victims).
Of those killed by unknown assailants, most were from Colombia (25 victims), followed by the Philippines (22 victims) and then Brazil (8 victims). All but two victims of land-related killings in Colombia and one in Brazil were taken out by unidentified attackers.
Communities claim that the unknown assailants were from criminal gangs and private armed groups, including those reportedly hired by private interests involved in land disputes or under the protection of authorities.
In the Philippines, on the other hand, most of the monitored killings (27 victims) were allegedly carried out by state forces (i.e., police, military and paramilitary) as government stepped up its counterinsurgency campaign. Local human rights groups and peasant organizations have many times denounced the said campaign as targeting unarmed farmers, farm workers, indigenous people and activists.
State forces were involved in the land-related killings of a total of 31 rural people, which include the victims from the Philippines as well as two from India and one each from Colombia and Palestine.
The alleged involvement of state forces in these killings further feeds the reign of impunity and terror that has been tormenting rural communities, especially in the countries where most of such killings are taking place.
PANAP added that the number of killings this year is higher than the 91 victims and 57 cases in 14 countries it monitored during the same period in 2018. Again, such increases were mainly pushed by the further deteriorating human rights situation faced by rural communities in countries where such atrocities are most intense.
The Philippines, for instance, had 21 cases and 33 victims of killings from January to November 2018, making it the deadliest country for rural people last year. This means that one Filipino farmer, farm worker, indigenous person or land activist was being killed every two weeks in 2018. This year, the average rose to one victim per week.
Aside from killings, PANAP also monitored land-related cases of arrests, detention, legal persecution, threats, harassment and physical assault as well as displacement.
All in all, PANAP monitored a total of 138 cases of human rights violations related to land conflicts and struggles in 23 countries worldwide from January to November 2019. During the same period in 2018, the number of monitored cases was pegged at 128 cases in 21 countries.
Cases of killings accounted for more than half of the monitored human rights violations related to land conflicts and struggles. With the Philippines, Colombia and Brazil, rounding out the top countries in terms of number of victims of land-related killings were Honduras with four victims and Guatemala, India, Indonesia, and Mexico with three victims each. Meanwhile, Cambodia, Congo, Costa Rica, Palestine, Peru and South Africa each had at least one victim of land-related killings.
The second most prevalent violation were arrests, detention and legal persecution with 32 cases and 152 victims in 11 countries. Meanwhile, 17 cases of threats, harassment and physical assault were also monitored with 24 victims in nine countries. Lastly, five cases of displacement had around 4,056 victims in three countries during the same period.
Land & Rights Watch is an initiative of PANAP and its partners and networks in the region to closely monitor and expose human rights abuses against communities opposing land and resource grabbing. The data and information were culled from online news and articles and reports from its partners and networks in the region.
While not exhaustive, PANAP stressed that the compiled data and information help provide a glimpse of the alarming state of human rights confronted by indigenous peoples, farmers, farmworkers and others in the rural communities around the world that are defending their right to land and resources. ###
For additional information, please contact [email protected]