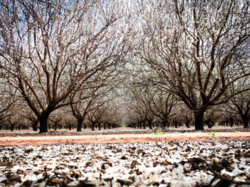 A Canadian pension fund has snapped up 12,000 hectares of almond orchards and forked out $490m for water rights.
Sydney Morning Herald | 3 December 2019


Canadian pension fund loads up on Australian water rights and almond farms
By Darren Gray
A Canadian pension fund has bought a huge parcel of Australian permanent water rights for $490 million to irrigate almond trees, in a move that puts the spotlight on foreign ownership of farms and water resources as drought continues to ravage the country.
The Public Sector Pension Investment Board (PSP Investments), one of Canada's largest fund managers, has also acquired 12,000 hectares of Victorian almond orchards in the Sunraysia district in a separate transaction.
PSP Investments manages the pension funds of federal public servants in Canada, the nation's defence forces and the Royal Canadian Mounted Police, also known as the Mounties.
One of PSP Investments' related entities will buy the 89,085 megalitres of permanent water rights from the Singapore-based global food and agribusiness Olam. The water rights are in the lower Murray-Darling Basin.
Advertisement
Olam said it had struck a new tiered-revenue-sharing agreement with PSP Investments for the almond orchards, related assets and water rights.
Olam will pay PSP Investments a share of revenue from the orchards for an initial 25 years, in an arrangement that includes an option for an additional 25 years.
The sale price of the orchards was not disclosed, but when they were first listed for sale as part of a 20,000-hectare portfolio of land, there was speculation it could fetch more than $300 million. The orchards were sold by a consortium of international investors that included Europe-headquartered private equity manager Schroder Adveq.
While foreign ownership of Australian farmland and water has often generated significant controversy, these transactions are effectively a change in the identity of the foreign owners of the assets.
The sale of the orchards has been approved by the Foreign Investment Review Board, but the water transaction did not need FIRB approval.
"Consistent with our asset-light approach to tree crop production, this arrangement will enable Olam Orchards Australia to focus on operations and continue to deliver best-in-class products and services to customers," said Ashok Krishen, the managing director and chief executive of Olam's edible nuts business.
"I am confident this partnership with PSP Investments will help lead the industry in sustainable farming and agricultural practices and protect critical natural resources, such as water, in Australia," he said.
PSP Investments managing director Marc Drouin said the agreement with Olam was complementary to its other permanent crop investments around the world.
"Our agreement with Olam Orchards Australia is consistent with our strategy to partner with best-in-class operators who take the long-term view and to invest in high-quality agricultural assets globally," he said.
The chairman of the Victorian Farmers Federation's water council, Richard Anderson, said that the 89,085 megalitres of permanent water rights fell well short of satisfying the annual irrigation requirements of the 12,000 hectares of orchards.
He said mature almond orchards in that part of Victoria would need 14 to 16 megalitres of water per hectare per year. Sixteen megalitres per hectare multiplied by 12,000 hectares of orchards equals 192,000 megalitres per year, which is far in excess of the entitlement bought by PSP Investments.
"Really, all you've got is a change of ownership, it (the water) has gone from a Singapore-owned company to a Canadian pension fund," he said.
"It's a big bulk of water but it's still being used in agriculture," he said.
"It's not as if they've just come in as a speculator and said 'we'll go and buy a big patch of water and we'll trade it every year'," he said.
The Australian almond industry is undergoing strong growth as orchards mature and produce more nuts and as more and more people adopt plant-based diets.
Last week, the ASX-listed almond producer Select Harvests reported a $53 million net profit for 2018-19, up 160 per cent on the 2017-18 year.