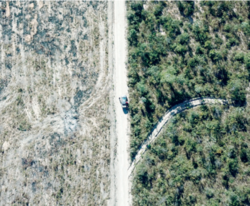 Greenpeace report reveals fast food suppliers importing deforestation and violence from Brazil
Mega-traders Cargill and Bunge are exporting soya from an agricultural estate in Brazil with a long record of violence, illegality, and environmental destruction, a Greenpeace International investigation has uncovered. Cargill and Bunge supply soya to numerous international companies, including fast food brands McDonald’s, KFC, Burger King, retailers and consumer goods brands that promised to eliminate deforestation by 2020.[1]
“Cargill and Bunge are supplying the market with soya linked to decimation and violence from Brazil’s Cerrado. Brands buying the soya drive this destruction. This soya is feeding chicken and meat sold in fast food and retail stores around the world,” said Cristiane Mazzetti, Campaigner at Greenpeace Brazil.
Cargill and Bunge both have silos on the Agronegócio Estrondo estate in Brazil’s Cerrado, and export its soya to Europe and East Asia.[2] Estrondo recently renewed a permit to deforest nearly 25,000 hectares of land – an area the size of Frankfurt – in the rapidly-disappearing savanna.[3] Soya traders have thus far resisted calls to curb deforestation in the Cerrado, where half of the natural vegetation has already been destroyed.[4]
Greenpeace International’s Under Fire also details reports of illegal land clearance, land grabbing, and slave labour on Agronegócio Estrondo. Members of traditional geraizeira communities report having been detained, abducted, shot, and having access to communal lands restricted by Estrondo’s private security force. In May 2019, a Greenpeace Brazil investigative team and German TV Channel ARD Weltspiegel documented an armed raid against one community living within Estrondo’s borders, capturing footage and photographs. Threats towards traditional and Indigenous communities and forest destruction are both on the rise since President Jair Bolsonaro came to power in January.[5]
“There has never been a more crucial moment for companies to act. The future of vital ecosystems and the communities that rely on them hangs in the balance. Companies must immediately end trade with environmental destroyers and take action to protect people and nature,” said Daniela Montalto, Campaigner at Greenpeace UK.
ENDS
The full Under Fire report may be accessed here.
------
[1] The owner of Burger King, Restaurant Brands International, pledged to stop deforestation only by 2030.
[2] According to export documents obtained by Greenpeace Brazil and Panjiva trade data. Greenpeace Germany protested a ship carrying soya from the Cerrado into the port of Brake, Germany on 4 August 2019. Greenpeace Brazil has since been able to confirm via export documents that soymeal from Agronegócio Estrondo, exported from Bunge’s silo, was on the ship.
[3] Permit renewed on 22 May 2019, by Bahia’s Institute of Environment and Water Resources (INEMA).
[4] Half of Cerrado destroyed according to Critical Ecosystem Partnership Fund.
[5] For example, Conselho Indigenista Missionário (CIMI) recorded 160 incursions into 153 Indigenous territories in the first 9 months of 2019, up from 109 in 2018. The deforestation rate in the Amazon increased by 30% between August 2018-19 over the previous year, reaching its highest rate in more than a decade according to INPE.