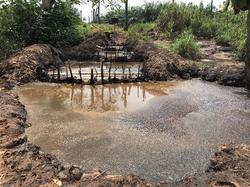 The stream of effluents that emanates from the Yaligimba palm oil mill flows right next to Mindonga, a settlement with hundreds of workers and their families, emiting a putrid smell and fumes, particularly in this section that is closest to the source of waste. The water tank located on the grounds of the mill is visible in the background, about 550 meters away, as measured with a GPS device. February 2, 2019, Yaligimba. (Photo: Luciana Téllez/Human Rights Watch)
Human Rights Watch | 25 November 2019