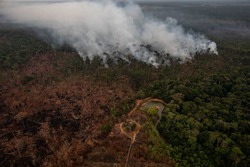 Deforestation in Brazil's Amazon rainforest rose to its highest in more than a decade10 years this year, government data on Monday showed, confirming a sharp rise under the leadership of right-wing President Jair Bolsonaro.

That is the worst level of deforestation since 2008, heaping further pressure on the environmental policy of Bolsonaro who took office in January and favours developing the Amazon region economically.

At a briefing to discuss the numbers, Minister of the Environment Ricardo Salles said the rise in deforestation showed the need for a new strategy to combat illegal logging, mining and land grabbing, which he said were to blame for the increase in deforestation.

He added that he would meet with governors of Amazon states on Wednesday to further discuss tactics to counter deforestation.

All options are on the table for countering deforestation, including activating the military for use in environmental enforcement operations, Salles said.

'Bolsonaro responsible for every inch'

Critics have accused Bolsonaro of weakening Brazil's environmental agency, IBAMA. They say his rhetoric has emboldened illegal loggers, miners and farmers and created a climate of impunity for those felling the forest illegally.

Greenpeace, an environmentalists organisation, placed the blame for the most recent data squarely on Bolosonaro.

"The Bolsonaro government is responsible for every inch of forest destroyed. This government today is the worst enemy of the Amazon," said Marcio Astrini, public policy coordinator for Greenpeace, in a statement.

Brazil's Climate Observatory, a network of non-governmental organisations that includes Greenpeace, said the 2019 increase in deforestation was the fastest in percentage terms since the 1990s and the third fastest of all-time.

Within a day of taking office, Bolsonaro signed an executive order making Brazil's Ministry of Agriculture responsible for the regulation and creation of new indigenous reserves, in a move widely seen as a boost for the country's powerful agribusiness lobby.

Months later, the INPE recorded more fires raging across the Amazon from January to August than any time since the agency began recording the blazes in 2013.

Environmentalists and non-governmental organisations said the fires, which are partially a natural seasonal phenomenon, were more widespread because of farmers setting the forest alight to clear land for pasture and loggers razing the forest for its wood.

Since taking office, the Brazilian leader has maintained an adversarial relationship with the INPE, which is a research unit of the country's science ministry.

In August, the head of INPE, Ricardo Galvao, was dismissed after a public dispute with Bolsonaro, in which Galvao accused Bolsonaro of "cowardice" for questioning deforestation satellite imagery released by the agency.

Bolsonaro had previously described INPE figures as a lie and said Galvao might be working "in service to some NGO".

The president did not immediately comment on the most recent numbers.