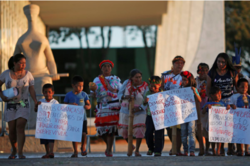 
Brazil prosecutors push soy, cattle moratorium to protect natives
by Ana Mano
SAO PAULO — In a part of Brazil plagued by land conflicts and violence against indigenous tribes, prosecutors say they are pushing major grains traders and meatpackers to stop buying from farmers and ranchers charged with crimes against natives.
Federal prosecutors have proposed the ban to agribusiness groups in the form of a “voluntary protocol,” focusing initially on the troubled southern cone of Mato Grosso do Sul, a state that produces about a tenth of Brazil’s beef and soy.
Grains traders such as Bunge Ltd and Archer Daniels Midland Co as well as meatpackers JBS SA and Marfrig Global Foods SA have plants in the area.
Industry groups have resisted the idea in talks since June, arguing it could set a dubious precedent of blacklisting suppliers before final judgment of their cases, said five people familiar with the confidential negotiations.
The federal prosecutors office in Brasília confirmed the previously unreported talks with agribusiness representatives about the proposed ban, but declined a request for an interview.
But Brazil’s soy crushing association Abiove said it will not agree to prosecutors’ request. “Our members already monitor production and do not purchase soy produced on indigenous lands, as required by law,” Abiove said in a statement late Thursday.
Press representatives for meat exporting group Abiec declined to answer questions.
Marfrig and Bunge declined to comment. JBS and ADM did not immediately reply to requests for comment.
While the farm industry has questioned the reasoning behind a ban, one source said prosecutors have pointed to rising pressure in Brazil’s export markets. A 2016 European Parliament resolution, for example, urged Brazil to protect indigenous rights and cited threats to tribes in Mato Grosso do Sul.
Concerns about Brazil’s environmental and human rights record are rising this year along with deforestation of the Amazon rainforest and invasion of tribal lands under new right-wing President Jair Bolsonaro. That has fed resistance to a new European Union trade deal with South America’s Mercosur bloc.
The European Union is Brazil’s second-biggest trade partner after China, buying some 17.5% of its $101.7 billion in agricultural exports last year.
The fresh debate over a farm goods moratorium protecting Brazil’s indigenous tribes highlights how more global scrutiny could strengthen the hand of prosecutors fighting crime on the country’s expanding farm frontier.
“Do you want to keep buying soy stained with Indian blood?” asked one of the prosecutors during talks with the farm industry, according to one of the sources, who requested anonymity due to the confidentiality of the negotiations.
Another source said even as many in the meatpacking industry agreed with the objective of reducing violence, there was concern that a list of banned ranchers could be arbitrary, illegal and a step toward creating a black market.
A more nuanced version of the prosecutors’ proposal may gain traction as negotiations evolve, the sources said.
RISING VIOLENCE
A partial list of the suppliers who would be affected by the proposed moratorium, which was reviewed by Reuters, included dozens of defendants accused of murdering, torturing and committing other crimes against indigenous people.
In one 2016 case, 12 people were charged in connection with an armed group financed by farmers to attack Guarani Kaiowá and Ñandeva Indians, according to prosecutors’ statements.
Indigenous advocates say the violence in Mato Grosso do Sul has grown over the past decade as booming demand for Brazil’s beef and soy in foreign markets such as China has pushed producers into land conflicts with local indigenous tribes.
“The fertile soil and favorable climate means that land here is in high demand – including indigenous land,” said Antonio Ramos, a professor of history and anthropology at the Federal University of Grande Dourados, in Mato Grosso do Sul. “The dispute over such valuable land is driving these conflicts,” he added.
Land conflicts have worsened under Bolsonaro, whose calls for economic development on native lands sound to many like an endorsement of land grabs by farmers, ranchers, loggers and wildcat miners.
Reports of land invasions, illegal logging and mining and killings on tribal reservations have risen sharply this year, according to the Indigenous Missionary Council, a charity linked to the Catholic Church.
(Reporting by Ana Mano Editing by Brad Haynes and Lisa Shumaker)