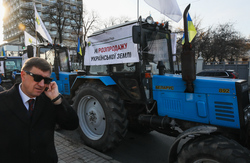 A man passes the rally against the adoption of a bill on the creation of the Ukrainian land market near Verkhovna Rada on Nov. 12, 2019. Ukraine's new government would allow the sale of farmland from next year to boost investment, as critics warned this could lead to a foreign land grab. The former Soviet country, whose stalling economy has been propped up by Western aid in recent years, is home to some of the largest swathes of cultivated land in Europe. (Source: Kyiv Post)
Reuters | 13 November 2019

KIEV (Reuters) - Ukrainian lawmakers voted on Wednesday to remove a ban on the sale of farmland for the first time in nearly two decades, a move supported by the country’s foreign backers that risks a political backlash.

The proposal must be voted on a second time to come into force. The ban would be lifted in October 2020 and the government says the move would add 2-3 percentage points to Ukraine’s gross domestic product (GDP) growth in its first year.

Supporters who want to scrap the moratorium say that doing so will unlock enormous investment potential in what is already one of the world’s top grain exporters.

But critics have concerns, including that it could allow local oligarchs to snap up land or that foreigners will muscle out poorer Ukrainians in purchasing plots.

As it stands, the proposed legislation stipulates that foreigners will not be able to buy land until 2024 though separately President Volodymyr Zelenskiy has said the issue should be put to a referendum, without specifying a date.

“Finally, we can move away from feudalism to real market relations as a fully fledged, developed country. Ukrainians have the right to freely dispose of their property!” Prime Minister Oleksiy Honcharuk said on Facebook after the vote.

The draft law sets a minimum starting price for farmland and limits the area that could be accumulated by one person or entity.

The economy ministry forecasts that one hectare of arable land could cost $2,200, depending on the region.

The World Bank has previously estimated that Ukraine could see its GDP growth rise by 1.5 percentage points yearly if the land sale ban is lifted, boost tax revenues and attract investment that would ultimately raise crop yields.

Wednesday’s vote drew mixed reactions. Hundreds of protesters tied to opposition parties gathered outside parliament, and brought a coffin with a dead pig inside in protest. Inside the chamber, some lawmakers temporarily blocked the podium.

Brussels praised the move, though it stressed the reform should be based on the rule of law, transparency and fairness.

“The EU supports the government’s plans to open the land market in Ukraine, a move that could unleash huge potential for Ukraine’s economy,” the European Union representative office in Ukraine said on Facebook.