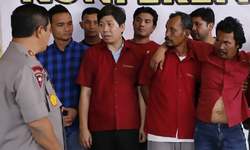 North Sumatra Police have arrested an oil palm plantation owner believed to be the mastermind behind the murder of two journalists-cum-activists, Maraden Sianipar and Maratua P. Siregar.

The two were found dead with stab wounds all over their bodies in a ditch near an oil palm plantation run by PT Sei Alih Berombang, also known as the multibusiness cooperative (KSU) Amelia, in Wonosari village on Oct. 30.

The arrest of the businessman, identified as WP, came after the police apprehended four suspects believed to have been directly involved in the murder, identified as DS, JH, VS and SH.

The police are still on the hunt for three other murder suspects, identified as JS, R and HS.

North Sumatra Police chief Insp. Gen. Agus Andrianto said it was believed the murders were triggered by a land dispute between the company and local farmers.

Agus said the businessman had paid JS Rp 15 million (US$1,068) to kill a farmer named Ranjo Siallagan to end the prolonged dispute but that the farmer was still alive.

He added that WP then directed JH to kill Maraden.

On the day of the murder, Oct. 29, Agus said Maraden and Maratua came to the plantation and that all of the suspects ─ except the businessman and JH ─ were there to meet them.

The four suspects each carried a kelewang (a type of bladed weapon), Agus added.

“The suspects asked the victims why they had come to the plantation before a quarrel broke out, which ended in murder,” Agus said, adding that the victims had answered that there were many thieves in the plantation.

The suspects played different roles in the murder, according to the police.

VS and SH allegedly struck Maraden with a piece of wood and threw the body in the ditch. DS, meanwhile, reportedly recruited R and hacked Maraden’s head and left palm with a kelewang. He also choked Maratua to death, police allege.

WP, however, denied allegations of his involvement in the murder.

He said the suspect also denied owning the business, claiming his father-in-law was one of the owners of KSU Amelia instead.

The police arrested VS and SH in Wonosari village in Panai Hilir subdistrict, Labuhan Batu, on Tuesday. DS was arrested in Humbang Hasundutan regency on the same day later in the evening, followed by JH in Karo regency.

The businessman, meanwhile, was arrested by the police in the CBD Medan Polonia housing complex on Thursday at around 2 p.m.

“The suspects have been detained for questioning,” Agus added.

If found guilty, the suspects face the death penalty, a life sentence or 20 years in prison under Article 340 of the Criminal Code (KUHP) on premeditated murder.

Before working as freelance journalists, Maraden and Maratua worked for local weekly Pilar Indonesia Merdeka (Pindo Merdeka). The two were also known for their activism and advocated for locals involved in land disputes.