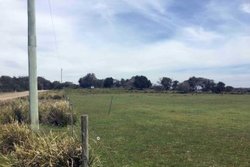 The Tasmanian land seized has had a development approved by a local council. (Photo: ABC News/April McLennan)
ABC | 30 October 2019

By Michael Dalla Fontana
A mansion in Melbourne's east, newly constructed units and more than 3,000 acres of Tasmanian farmland are among $17.3 million in property seized by authorities as part of an investigation into alleged money laundering by Chinese nationals.
The Australian Federal Police (AFP) this morning said it had seized six properties in Melbourne's east — including a new mansion in Mont Albert, three units and a townhouse in Box Hill North and a commercial property in Blackburn — and more than 3,000 acres of farmland at Musselroe Bay on Tasmania's north-east coast on Tuesday.
AFP Detective Superintendent Kate Ferry said the operation followed a 2017 request from the Chinese Ministry of Public Security for help to identify two Chinese nationals suspected of laundering proceeds of crime in Australia.
"Chinese authorities believe the money was raised in China through real estate and bank loan fraud," Detective Superintendent Ferry said.
"What the AFP alleges is that the two Chinese nationals moved about $23 million of alleged proceeds of crime from China since late 2012.
The AFP further alleged the proceeds of crime were used to purchase or develop the properties in Melbourne and Tasmania.
Detective Superintendent Ferry said she could not go into more detail about the properties in question and said the investigation was ongoing.
Land seizure 'surprises' mayor
A Tasmanian mayor whose council has been dealing with a development application at the north-east property said he was surprised by the seizure.
"Only in the last couple of weeks we have done an inspection out there for a substantial commencement of the planning application and we have ticked that off," he said.
"So we were sort of surprised obviously … that this has occurred.
"We were of the understanding that there were some issues around the proponents actually getting their money out of China and into Australia to commence the project.
"They have got substantial commencement [approval] and so until this morning we were of the opinion that it was finally going to happen."