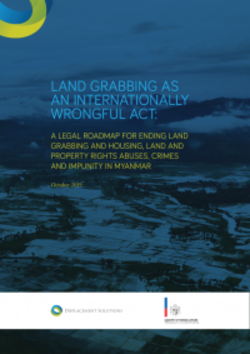 
DS has just published a major 184-page legal report on the land grabbing in Myanmar and how these processes constitute internationally wrongful acts. The report includes a 21-step legal roadmap to end land grabbing once and for in Myanmar, a nation that is one of the worst in the world in

Although the general power of States to compulsorily acquire, expropriate or otherwise confiscate or ‘grab’ land, homes and properties is legislatively recognised in virtually all national legal systems, to be lawful these processes generally carry with them five fundamental pre-conditions. Namely, when housing, land or property rights are revoked or limited through these processes, this can only be carried out when the taking concerned is:

1) subject to law and due process;
2) subject to the general principles of international law;
3) in the interest of society and not for the benefit of another private party;
4) proportionate, reasonable and subject to a fair balance test between the cost and the aim sought; and
5) subject to the provision of just and satisfactory compensation.

In all countries, the act of compulsorily acquiring land is highly regulated and something which rights-respecting governments are often reluctant to invoke except in exceptional circumstances when all other viable alternatives have been pursued. In general terms, the housing, land and property rights of affected persons and communities are often at the centre of proposed projects involving land acquisition and project evaluation processes, and active efforts are often undertaken by the relevant state authorities to avoid acquisition and resultant resettlement if at all possible, and when no other option exists, to ensure the full protection of relevant human rights norms. As this paper reveals, such points of view – even with the recent adoption in May 2019 of a new Land Acquisition, Resettlement and Rehabilitation Law– are almost entirely absent from the both the legal framework and practice of those engaging in the massive land confiscation epoch through which Myanmar is now passing and which it has experienced for decades. In short, all of these five basic international rules governing land acquisition by the State are systematically violated in Myanmar.

Indeed, if anything, measures to ensure that land confiscation in Myanmar is not carried out in a manner contrary to all of the five pre-conditions outlined above are almost universally absent when land is sought by others than those owning it, working it or residing upon it. Within the country, in fact, every act of land confiscation, acquisition, grabbing and expropriation in Myanmar can be assessed against these five pre-conditions, and in the overwhelming majority of cases – including those that have taken place subsequent to the so-called political reform process underway since 2011, and following the 2015 of the National League for Democracy – are structurally inconsistent with the norms expected of a country that has ratified human rights treaties protecting basic HLP rights. This report finds that the vast majority of all acts of land grabbing (including those acts of confiscation carried out under the Land Acquisition Act(1894), recently replaced by a new, but certainly not dramatically improved, land acquisition law) violate basic international norms governing these matters, and many constitute internationally wrongful acts.

In particular, the following list outlines common components of these processes in Myanmar today:

Arguably, thus, the sheer scale of arbitrary land confiscations and subsequent dispossession in Myanmar is so widespread, so inadequately regulated and so contrary to basic legal protections, that an exceptionally strong case exists for wholesale legal and policy reforms governing housing, land and property rights. An additional case can be made that all of the criteria needed for the International Criminal Court to become involved in this issue in the country are fully in place. When comparing what the people of Myanmar should be entitled to in terms of HLP rights, and what in practice they actually are forced to experience, we see nothing less than gross and systematic violations of internationally recognised human rights and other legal norms that the State of Myanmar has voluntarily undertaken to comply with in good faith. These include crimes against humanity and war crimes.

This in-depth report begins with an examination of how land confiscation takes place in the country, the scale of the practice, the methods used, who actually benefits from these practices, and how the legal system of Myanmar actually promotes what are, inter alia, illegal acts under international law. The second section then examines general international and national rules governing the practices of land acquisition in the public interest and what criteria need to be in place for such acquisition to be considered legal under international law. Section 3 then looks into how human rights law, including case law and jurisprudence has approached the sensitive issues surrounding land acquisition and what is expected of countries engaged in these practices. The next section then looks specifically at the core topic of this report; namely does land grabbing, confiscation or whatever terms are used constitute an internationally wrongful act which in turn activates State responsibility and the procedures and mechanisms that can be invoked to hold violator States accountable?

The report then concludes with a legal roadmap of constructive, specific and actionable recommendations designed to build an entirely new vision of housing, land and property rights in the country which is fundamentally different from how these issues are treated today in contemporary Myanmar.

You can read the entire report here: dis6171_land_grabbing_as_an_internationally_wrongf