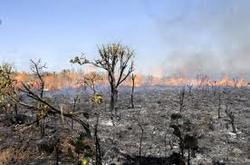 Altamiran Ribeiro, a Brazilian land rights activist and a representative of the Pastoral Land Commission of the Catholic Church for the northeastern Brazilian state of Piauí, spoke at the University in Mergenthaler Hall on Thursday, Oct. 17. Ribeiro spoke about the mass land takeovers on behalf of large corporate developers in Brazil and the long-term consequences such land grabs can have on local communities and the environment.
Ribeiro explained that Piauí has recently become a prime target for land developers since the real estate opportunities there are potentially highly profitable.
He stated that Piauí is relatively underdeveloped, accounts for 70 percent of Brazil’s total water supply and contains one of the most biodiverse ecosystems in the world. The land is also rich in natural resources that have up till now have been largely untapped.
“There’s interest to extract precious minerals and also iron minerals,“ Ribeiro said.
Ribeiro explained that the developers are backed financially by international investors. A pamphlet circulated at the event by international anti-poverty non-governmental organization ActionAid noted that one such investor is the Teachers Insurance and Annuity Association of America (TIAA), a pension fund which has nearly a trillion dollars in total assets and five million clients working with it. Their client list includes the University and many of its staff retirement plans.
According to an ActionAid pamphlet distributed at the event, TIAA is the world’s largest investor in farmland and has been accused of contributing to fraud, deforestation, human rights abuses and environmental destruction among other wrongs.
Ribeiro stated that this land development comes at the cost of the property and means of living for local communities.
“They’re losing their lands, losing their seeds, and losing their livelihoods, and losing their ways of life, their cultures and traditions. That region is in the south of Piauí, within a big project called MATOPIBA,” he said.
Ribeiro explained that the MATOPIBA project refers to the conversion of large swathes of savannah land to soybean-friendly farmland by developers who then sell the land on to large agribusinesses.
He said that most local communities and indigenous peoples have refused to sell their land, leading the developers to resort to more forceful methods. He alleged that developers have resorted to deliberately contaminating and diverting the communities’ water supply.
Ribeiro stated that as a consequence of this intentional sabotage, local communities are unable to drink from the rivers during the rainy season, fish and plants are dying in huge numbers, and swimming across the river now leaves a nasty chemical rash. He added that deforestation has also taken place in order to facilitate development, which also forces individuals to leave.
Ribeiro noted that the regional and federal governments’ responses have been either ineffective or downright apathetic.
“The government of Piauí and the government of Brazil are only interested in development in the name of so-called development. So until now I ask: Who is this development for? Those people that are in the roots of those places, they’re being killed,“ he said. “The current Brazilian government hates the communities, and as proof we have its relationship with indigenous people and also the liberation of the environmental laws and regulation.”
Ribeiro added that the land speculation in Brazil can demolish the livelihood of a community.
“When I’m talking about the killing of those communities, I’m talking about the taking of the rights of those communities to have their own livelihoods, to have their own culture, to collect their own medicine and food,“ he said.
Riberio noted that the land developers have far more extensive resources than groups such as his church commission.
Still, he noted that they have had some minor victories, such as purchasing land before developers can and growing to encompass more than 40 divisions as they grow in publicity. They have also managed to establish wells with clean drinking water for the communities.
Sophomore Xandi Egginton emphasized the importance of spreading the word about TIAA’s involvement in land speculation.
“To me it seems like an issue that needs more recognition, considering that the majority of universities and many nonprofits use TIAA to manage their pension funds,“ Egginton said.
Ribeiro maintained an open invitation to the audience to come see the effects of land speculation themselves.
“We invite all of you to come on your vacation and maybe verify what’s going on,“ he said.
Original source: John Hopkins Newsletter
TWITTER
FACEBOOK
WHATSAPP
PRINT
E-MAIL
TWITTER
FACEBOOK
WHATSAPP
E-MAIL