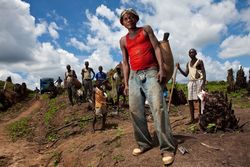 By Janene Pieters
Dutch development bank FMO funded a number of projects involved in serious abuses, Trouw reports based on its own research. The newspaper identified at least seven projects that FMO funded in which the companies involved were connected to murder, intimidation, environmental damage, arbitrary arrests and land grabbing.
The Trouw investigation is based on interviews with researchers, lawyers, civil society organizations, independent complaint committees and FMO itself. The bank, which is intended to stimulate economic growth in developing countries, is 51 percent owned by the Dutch state.
During the construction of dams in Honduras and Panama, projects FMO was involved in as financier, opponents of the projects were murdered. The director of the Honduran company building the dam was arrested for such a murder. In Panama, protests against the dam were crushed by the local armed forces, resulting in multiple deaths and many injuries.
FMO linked projects in Congo, Liberia, Sierra Leone, Senegal, and Guatemala also received complaints from the indigenous populations, reporting incidents including murder, violence, intimidation, repression and arbitrary arrests if they oppose a project. A number of projects also involved land-grabbing - FMO-funded companies driving indigenous peoples from their lands, leaving them without means of support.
FMO CEO Peter van Mierlo told Trouw that "we have a list of problem projects that we follow" that is not much longer than the list compiled by Trouw. But he denies that there is a structural problem. "It is unrealistic to think that nothing will ever go wrong after all", he said to the newspaper. He vehemently denies land-grabbing. "We always do extensive research into land rights, sometimes even more than international standards require."