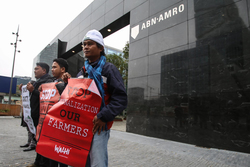 Amsterdam, the Netherlands, October 7th 2019 – Community representatives, impacted by palm oil companies in Liberia and Indonesia have traveled to the Netherlands to convey their grievances with ABN Amro, the financier of those companies. Supported by civil society organisations Milieudefensie, SDI and WALHI. In February the bank announced that communities could come and report on rights violations by its clients who should provide remedy.

Panyonnoh explains: "GVL came with big promises for development, but today we lost our land and we ended up in poverty. Farming is difficult. Almost no jobs. The forest we used to find medicine, fish and clean water is destroyed. People are intimidated and harassed with the support from GVL.” Panyonnoh and 16 other young members of his community were in jail for one year after they protested against GVL.

Palm oil fruits from Mr. Hemsi from Central Sulawesi, Indonesia were seized by PT Mamuang, a subsidiary of Astra Agro Lestari (AAL), with whom Hemsi has a land rights conflict. He ended up in jail several times because of the conflict. ABN Amro offers its customers the opportunity to invest in Astra International, the parent company of AAL.

Hemsi says “This land is everything my family has to live from, so I will continue to fight for it and get it back. My neighbours are facing similar struggles. Land should be for the people and information on palm oil company concessions should be made public so I can win my case. ABN Amro should stop facilitating investment in AAL and its parent company Astra International."

Milieudefensie, WALHI, SDI and other civil society have been giving banks like ABN Amro notice about the environmental and social harms in the industrial palm oil sector for twenty years. The bank continues to finance these companies, fully aware of the adverse impacts on people and the environment.

"After years of challenging and bringing complaints to the companies in Liberia and Indonesia, these landrights defenders say ‘enough is enough’. Today, Terry, Harriet and Hemsi are here to confront the bank in the Netherlands and hear what they really do to get their clients to improve", says Evert Hassink from Milieudefensie. " ABN Amro called on the victims of their clients this February to come and report about the abuses, well here we are. Even though it is of course crazy that they have to come all the way to make their point."

Binding rules for banks and investors

At the moment there are no rules that prevent banks and investors from making substantial profits with destruction of the rainforest, human rights violations, climate-polluting oil extraction or child labor. That is why clear European rules must be put in place so that these harmful investments stop. Milieudefensie started a petition three months ago, addressed to the Dutch Finance Minister. He is called upon to raise the issue with the new European Commission.