Farmland sales to foreigners goes from trickle to a torrent 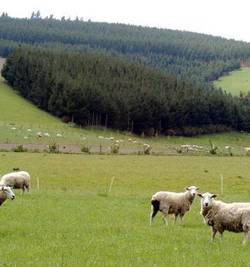 
Farmland sales to foreigners goes from trickle to a torrent
Press Release
The news released today that foreign owned forestry company have purchased more than 77000 hectares of good Kiwi farmland in just four years should be ringing alarm bells at the Beehive according to conservation group 50 Shades of Green.
The fact that the Overseas Investment Office can blindly give those purchases the official tick tells New Zealand that the process is out of control.
That a foreign company can acquire that amount of farmland seemingly without question is an indictment on government policy according to 50 Shades of Green president Andy Scott.
“That farmland would have previously supported farmers, rural communities, shops and schools,” Andy Scott said. “Now it is lost forever growing trees to support foreign owned conglomerates.
“The fact that six out of ten of the largest landowners in New Zealand are foreign owned forestry companies should tell the government they’ve got it wrong.
“Is the government happy that New Zealand is reducing its food production capacity to the extent it is.
“We’re selling the family silver with what can only be described as indecent haste,” Andy Scott said.