400 crores worth of floriculture in Ethiopia; In the grip of the businessman 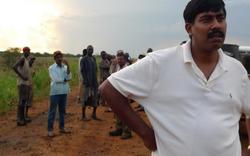 Below is a Google translation of the original in Malayalam

400 crores worth of floriculture in Ethiopia; In the grip of the businessman

Thrissur: A businessman who smuggled floriculture in three foreign countries, including Ethiopia, has been taken into custody by the City Police. Sai Ramakrishna Karurri, 55, from Sadasiva Nagar, Bengaluru has been arrested.

He has over 4,000 acres of floriculture in Ethiopia, Indonesia and Zimbabwe. It also owns a business empire worth Rs 1,200 crore in India and overseas. He received Rs 28 crore from the Chalakkudy man in exchange for a contract to pay for the harvest of floriculture.

It is understood that the first installment of Rs 60 lakh was handed over to a hotel in Thrissur. The incident came to light after an expatriate businessman complained to the city police that Sai Ramakrishna had defrauded him of his money after receiving the money.

The East Police team came to Bengaluru to investigate the complaint and lodged his arrest.

However, he was admitted to a government hospital in Bengaluru due to ill health. With the help of the police court, the accused was brought to Thrissur and taken into custody. The Dubai Police have also filed a case against Sai Ramakrishna on the complaint of the expatriate Malayali businessman.