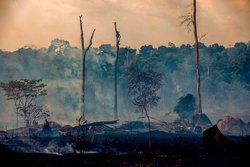 
New investigation by Global Witness uncovers for the first time a truly global picture of major financial players driving $44 billion into companies directly or indirectly involved in deforestation in the Brazilian Amazon, the Congo Basin and Papua New Guinea.
This includes some of the largest names in global finance—Bank of America, Deutsche Bank, HSBC, Santander and Standard Chartered among them— investing tens of billions of dollars into such companies.
In total, Global Witness identified more than 300 banks and investors funding businesses connected to forest destruction.
Money flowing through financial capitals like London, Berlin, Singapore and New York used to fuel companies destroying forests to produce products like palm oil, beef, and rubber. The NGO is urging policy makers to address the systemic failure of the financial system by introducing regulatory measures, including mandatory due diligence and reporting on environmental, social and governance risks, to curb this kind of damage.
Monday 23rd September 2019 – A new investigation reveals for the first time the epic scale of investment into global deforestation, by household name banks and major investment players.
The research, carried out by environmental and anti-corruption NGO Global Witness, reveals how a veritable A to Z of world finance is enabling the destruction of three of the world’s biggest rainforests.
Amongst those identified  are some of the largest names in global finance—Bank of America, Deutsche Bank, HSBC, Santander and Standard Chartered among them—providing tens of billions of dollars in financing between 2013-2019 to companies either directly or indirectly deforesting the largest rainforest regions of the world.
Five of the world’s leading investment banks, JPMorgan Chase, Goldman Sachs, Bank of America, Barclays and Morgan Stanley are also implicated. Global Witness wrote to each bank and received responses, which are referenced in the full report ‘Money to Burn’ available on request.
Six major agribusinesses causing this damage – which these well-known global financial players invest in – produce agricultural commodities like palm oil, beef, and rubber.
Global Witness investigated these giant companies over six years (2013-2019), operating across the three largest single rainforests on earth – Amazon, Congo Basin and New Guinea - and found they were backed to the tune of $44 billion by over 300 investment firms, banks and pension funds headquartered across the globe.
The revelations in the report ‘Money to Burn’ come after a summer of international outcry over the burning of the Brazilian Amazon, and fresh from a week of strikes and climate action across the globe. Studies have shown that forests and other ecosystems could make up more than a third of the total carbon mitigation by 2030 needed to limit global heating to a 2-degree Celsius rise.
Yet in 2018 alone an area of primary tropical rainforest the size of Belgium was destroyed. About a quarter of forest loss, or as high as 78% in South East Asia and 56% in Latin America, was to make way for agricultural commodities, including beef and palm oil.
Ed Davey, Head of Forest Investigations, Global Witness said:
“The rapid breakdown of our climate is a concern to many – including bank customers – so it’s unsurprising that banks and investors proudly trumpet policies on ethical investment and lending, giving the impression they are not pumping money into companies that would fell and burn precious rainforests.
“But their hypocrisy is clear: the same financial institutions are breaking their own policies at will and in search of profit, make many of their promises barely worth the paper they are printed on.
“Members of the public will be shocked to know that the bank they have a current account with, that manages their pension fund or invests their retirement nest egg are enabling the destruction of the world’s most previous ecosystems.”
“$44 billion is a terrifying sum of money to be ploughing into companies that destroy forests – at a time when we need trees more than ever. These household name banks and iconic investment funds our exposé highlights will be familiar to anyone who has looked at the skyline of Wall Street or Canary Wharf, read a newspaper or opened a current account. But the activity in this report is just the tip of the iceberg.”
Global Witness is calling on the financial sector to take responsibility for the impact of their financing and investments on forests and the climate.
They are also urging policy makers to address the systemic failure of the financial system, and the companies it finances or invests in, to tackle deforestation by introducing regulatory measures, strengthening their existing commitments, and take meaningful measures to ensure they are implemented effectively.
Original source: Global Witness
TWITTER
FACEBOOK
WHATSAPP
PRINT
E-MAIL
TWITTER
FACEBOOK
WHATSAPP
E-MAIL