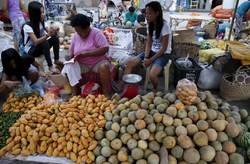 Vendors display fruits at a food flea market in Mogpog, Marinduque in central Philippines March 27, 2016. Photo: REUTERS/Erik De Castro
Palm oil plantations in Indonesia and commercial fruit orchards in the Philippines have uprooted indigenous people and rural communities from their land, despite laws put in place to protect them, human rights groups said.

"Businesses from coal to agribusiness, from mining to tourism, are allowed to run rampant and irreparably damage the lives of ordinary Filipinos," Ben Leather, a senior campaigner at Global Witness, said in a report.

"International companies are still not carrying out proper due diligence to avoid conflicts – particularly in countries like the Philippines, where laws protecting land and indigenous rights are often not enforced."

The human rights group earlier this year said the country was the deadliest in the world for land rights activists in 2018, with killings spiking under President Rodrigo Duterte.

On the western Palawan island, at least 12 land rights activists have been killed since 2004 trying to prevent illegal timber logging to build hotels, many of them linked to politicians, Global Witness said, citing local green groups.

In Bukidnon province in northern Mindanao, a supplier for U.S.-based food company Del Monte was linked to violence against indigenous people whose land had been forcefully taken for pineapple plantations, Global Witness said.

A spokesman for Del Monte said there was "no grain of truth" to the report.

"Del Monte Philippines categorically denies the report ... implying inappropriate business behaviour. Del Monte vigorously promotes the welfare of stakeholders across its global supply chain and enjoins its partners to do the same," the spokesman said in an email.

Globally, indigenous and local communities own more than half of all land under customary or traditional rights. Yet they have legal rights to only about 10%, according to the Washington-based advocacy group Rights and Resources Initiative.

Between 2001 and 2017, Indonesia - the world's top palm oil producer - lost 24 million hectares (59 million acres) of forest cover, an area roughly the size of the United Kingdom, according to a HRW report published on Monday.

Environmentalists blame much of the loss of forests and smog-causing fires on land clearance for growing oil palm, which is used in cooking and in items like soaps and shampoo, snack foods, pizza, bread and biodiesel.

"Conflicts related to land have frequently been linked to oil palm plantations (which) have adversely affected indigenous peoples' rights to their forests, livelihood, food, water, and culture in Indonesia," HRW said.

"Indigenous communities will continue to bear the brunt of the oil palm plantations' impact."

Palm oil industry watchdog, the Roundtable on Sustainable Palm Oil (RSPO), which has committed to addressing deforestation, said neither company was a member.

In June, authorities said a moratorium on new forest clearing for oil palm plantations or logging operations, which has been extended since 2011, would become permanent.

"The fires are raging in the backdrop of a larger system that facilitates the deprivation of indigenous land rights, and are yet another threat to the indigenous communities and their ancestral forests," she said.