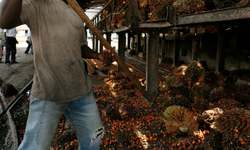 A worker shovels fruit from oil palm trees at a plantation near Lokutu, in the Democratic Republic of the Congo. (Photo: Jan-Joseph Stok/Greenpeace)
The Guardian | 27 September 2019


An independent investigation has been launched following the alleged murder of a Congolese activist by a security guard in the employ of a palm oil company part-funded by the UK development bank.
CDC, which is wholly owned by the Department for International Development, appointed independent investigators to examine the circumstances surrounding the death of Joël Imbangola Lunea, a 44-year-old father of eight, in Bempumba on 21 July.
Land rights activists and villagers claim they are being harassed and intimidated by employees at Feronia, one of Africa’s largest palm oil companies.
The CDC, which received £1.8bn in aid between 2015 and 2018, owns 38% of Feronia, which employs about 9,000 people in the Democratic Republic of the Congo (DRC). The loss-making Canadian-listed palm oil company and its subsidiary, Plantations et Huileries du Congo (PHC), also receives support from other European development banks.
The CDC inquiry will examine Feronia’s management of security teams as well as the immediate circumstances of Imbangola’s death. It follows an outcry over the failure of local police to arrest the suspect immediately.
The bank, which has invested $51.9m (£42m) in Feronia since 2013, will report on the investigation’s findings within a few weeks, according to the organisation’s website.
CDC said in a statement: “Immediately following the tragic death of Mr Joël Imbangola Lunea, and separate to any police investigation, CDC appointed independent investigators to examine whether the incident was in any way connected to the alleged perpetrator’s employment at Feronia.
“While the incident took place 18km away from Feronia’s property when the employee was on holiday, it was entirely the responsible course of action to appoint independent investigators to examine the company’s management of its security personnel and specifically, the individual alleged to have killed Mr [Imbangola]. It would be inappropriate to comment further until the investigation is concluded.”
CDC has allocated nearly $10m of its investment in Feronia to improve healthcare, education and infrastructure.


Imbangola, a riverboat skipper, was a member of RIAO-RDC, a Congolese land rights NGO involved in a dispute with Feronia and PHC that dates back to 1911, when the land was granted to British Lord Leverhulme by the Belgian colonial authorities. RIAO-RDC claims ancestral land and forests for three palm-oil plantations operated by PHC were “illegally stolen” from communities and have left them unable to adequately feed and house their families.
The skipper was ferrying passengers on his pirogue near the northern Congolese village of Bempumba when the alleged attack took place.
A relative of Imbangola, who spoke to the Guardian but did not want to be named, said: “We have lost the head of our family. We have lost everything. We have nothing, no money, no means to pay for lawyers to investigate. Police are doing nothing. We are scared.”
The family member said local staff at Feronia claimed the suspect, who is now in custody, did not work for the company. However, in a statement on its website in July, the company acknowledged one of its employees was being sought by police for Imbangola’s murder.
In 2017, British MPs from the international development committee expressed concern over CDC’s investment in Feronia, following Reuters reports that the company had failed to meet a promise to improve housing for its Congelese staff, some of whom were paid less than the minimum wage. They recommended CDC publish a “full account of its investment in Feronia, addressing concerns about wages, conditions and land disputes”.
In response, CDC said it was “working hard” to increase wages from 2017. Feronia provides schools and hospitals and other infrastructure for workers and communities, it said, “without the involvement of development finance institutions in Feronia and PHC, around 9,000 permanent and casual jobs would have been lost in one of the most remote parts of the poorest country in the world”.
In November, representatives of nine communities in the DRC, including RIAO-RDC, turned to a dispute mechanism set up by German development bank DEG to air their grievances against Feronia, backed by a number of NGOs including Oxfam.
Since then, according to RIAO-RDC, the groups have been subject to increasing harassment and intimidation by Feronia staff.
Jean-François Mombia Ataku, the director of RIAO-DRC, said in a statement: “RIAO-DRC calls on the DEG and the other development banks that fund and hold shares in Feronia to take all measures possible to ensure that PHC-Feronia respects the human rights and dignity of the communities, peasants and workers.
“We make an urgent appeal to all international human rights organisation, land defenders and other concerned groups to get involved in this situation, which is evolving from bad to worse despite the peace process that is under way.”
Nick Dearden, director of Global Justice Now, called on DfID to conduct its own investigation into Imbangola’s murder in order to make informed decisions about CDC’s future investment in Feronia and determine “whether restitution is owed” to the communities.
A spokesman for DfID said they were aware of Imbangola’s death and added: “It would be inappropriate to comment further while a police investigation is ongoing.”
Feronia did not respond to requests for comment from the Guardian.
A statement on Feronia’s website, posted in July, said: “The company is deeply saddened to learn that one of its employees is being sought by the police in relation to the death of Mr Joël Imbangola Lunea on Sunday 21 July 2019. Police are treating Mr [Imbangola]’s death as murder.”
The company said it was trying to establish the facts of the case, as there were “different versions of events” being reported.
“A number of witnesses have informed the company that the disagreement which led to the tragic incident was of a personal nature but, with the incident occurring approximately 18 km from Feronia’s plantation, near the employee’s home village, whilst he was on four weeks’ annual leave, establishing facts is proving difficult.”
Additional reporting by Roger Mwasua Nzambe
Original source: Guardian
TWITTER
FACEBOOK
WHATSAPP
PRINT
E-MAIL
TWITTER
FACEBOOK
WHATSAPP
E-MAIL