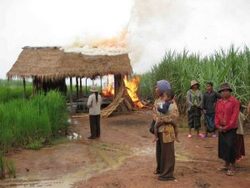 IDI | 25 September 2019
UK government body accepts OECD complaint against sugar “sustainability” body
(September 25, 2019) - The UK National Contact Point for the OECD, a government body that monitors the operations of British businesses overseas, has ruled admissible a landmark complaint against the sugar industry’s sustainability certification body, Bonsucro. The decision establishes that London-based Bonsucro is bound by OECD standards on responsible business conduct and does not operate in a human rights vacuum. This has ramifications for other industry sustainability associations, which have grown in importance in response to consumer demand for ethically sourced products.
The complaint was filed in March on behalf of more than 700 displaced Cambodian families by the U.S. organization Inclusive Development International and the Cambodian organizations Equitable Cambodia and the Cambodian League for the Promotion and Defense of Human Rights (LICADHO).  It alleged that the sugar association violated the OECD Guidelines for Multinational Enterprises by failing to hold its member company, Mitr Phol, accountable after the Thai sugar giant grabbed the families’ land and left them homeless and destitute.
Between 2008 and 2009, the families were forced off their land to make way for Mitr Phol’s sugarcane plantations in northwestern Cambodia. Those who sought to defend their rights were jailed. Just months after the much-publicized forced evictions, Mitr Pohl was admitted as a member of Bonsurco, the self-proclaimed association for sustainable sugarcane production.  With Bonsucro’s public stamp of approval, Mitr Phol’s biggest customers, past and present - including The Coca-Cola Company, PepsiCo, Mars Wrigley, Nestlé and Corbion – could advertise their sugar as responsibly sourced.
The victims filed a complaint to Bonsucro’s grievance mechanism in 2011, asking the sustainability body to hold its member accountable for the rights abuses they suffered, which they argued also breached Bonsucro’s code of conduct.  Despite confirmation of the allegations by the Thai Human Rights Commission, some eight years after the complaint was filed, Bonsurco’s board of directors dismissed the case on the grounds that it did not receive cogent evidence of a breach.
“Bonsucro has failed in its mission to ‘promote sustainable sugarcane production around the world’ - first by whitewashing the grievous legacy of land grabbing of one of its prominent members, and then by arguing in response to our complaint that it is not bound by the international framework on business and human rights,” said Natalie Bugalski, Legal Director of Inclusive Development International.   “By accepting the complaint and deciding that the issues merit further consideration, the UK government agreed with our fundamental premise that Bonsucro should indeed be held accountable to the OECD’s human rights standards.”
This is the second OECD Guidelines case against a multi-stakeholder initiative. Last year, Indonesian organizations filed a complaint against the Roundtable on Sustainable Palm Oil related to adverse impacts in the palm oil sector. The complaint was accepted for further consideration by the Swiss National Contact Point in May 2018.  These two cases establish a firm precedent that such multi-stakeholder initiatives are covered by the OECD Guidelines.
“This is an important victory for the communities In Oddar Meanchey, which have suffered a decade of hardship after losing their homes and farms to the sugar company,” said Eang Vuthy, Executive Director of Equitable Cambodia. “We hope this decision will finally encourage Bonsucro to bring Mitr Phol to the table to discuss redress.”
The UK National Contact Point will now offer the parties an opportunity to mediate the issues, or if mediation fails, it will examine further the claim that Bonsucro’s actions are inconsistent with the OECD Guidelines.
The UK NCP’s Initial Assessment can be found here.
The full complaint is available here.
For more information, see:
https://www.inclusivedevelopment.net/mitr-phol/