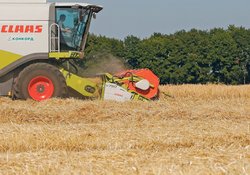 Leah Soroka, program manager for Eastern Europe and central Asia agri-finance with the World Bank's IFC, said the President's proposal to privatise farmland would be a game-changer. (Photo: REUTERS/Valentyn Ogirenko)
The Producer | 19 September 2019

By Sean Pratt
Analysts think the country could significantly increase crop production if it goes ahead with its privatization plans
Canada could be facing stiffer competition from one of its main grain export rivals if the country follows through on a newly announced farmland reform policy, say analysts.
Reuters reports that Ukrainian President Volodymyr Zelenskiy has ordered his government to submit a draft law for farmland reform by the beginning of October.
State-owned land is expected to be privatized starting in April and the longstanding ban on the sale of privatized land will be lifted.
Ukraine’s private farmland is owned in 6.4-acre plots by about 6.4 million people. Owners are forbidden from selling the land but can lease it out.
Much of that land is being leased by agricultural holding firms called agroholdings, which are large corporate entities that operate a minimum of 25,000 acres of land. They are vertically integrated enterprises that do everything from producing farm inputs to exporting grain.
Some agroholding farms have up to 1,000 lease agreements.
Leah Soroka, program manager for Eastern Europe and central Asia agri-finance with the International Finance Corp., said Zelenskiy’s policy proposal would be a game-changer.
“It moves land to efficient producers, will enable longer-term productivity investments and land can be used to obtain credit to grow their business,” she said in an email.
Soroka said the policy change would finally allow farmers to use farmland as collateral for credit.
“(It) should increase productivity and export potential. Farmers can invest in their own on-farm grain storage, irrigation and other things,” she said.
Ross Kingwell, chief economist of the Australian Export Grains Innovation Centre, co-authored a 108-page report on Ukraine for the centre in 2016.
He said there have been numerous attempts at enabling the sale of privately owned land in the past.
“Most attempts at lifting the moratorium result in further procrastination due to political uncertainties and commercial concern,” he said in an email.
But Zelenskiy is determined the moratorium will be lifted by Dec. 1, 2019.
“Now we have a unique situation, a unique chance to carry out all necessary reforms. We have everything for this: the political will of the president, the majority of the Verkhovna Rada (parliament), the government and the prime minister ready to work,” he said in the Reuters article.
About three-quarters of Ukrainian farmland is privately owned with the rest controlled by universities, research firms and other government entities.
Kingwell believes some of that state-owned land will end up being owned by agroholdings firms, which already control about 27 percent of the country’s privately owned farmland.
He agrees that the proposed legislation will result in more efficient farming practices in Ukraine.
“Farm production in Ukraine would increasingly have a business rather than an additional social focus. Farm labour productivity will increase. The value of farmland will increase and grain production will increase,” he said.
Land reform would reduce the transaction costs of having to maintain hundreds of leased parcels of land.
However, it could also lead to social unrest because many landowners waive lease payments in return for employment by agroholding firms.
“If the moratorium is lifted and land can be sold rather than leased, then some agroholdings will opt to purchase land yet also reduce their labour force,” said Kingwell.
That could also result in a reduction in crop diversity with more of a focus on growing sunflower, corn, wheat, barley and rapeseed and less of a focus on other crops.
“One of the advantages of a large workforce on Ukrainian farms is that multi-crop rotations can be accommodated. However, if a farm’s workforce is greatly reduced then some minor crops in rotation sequences may be dropped,” he said.
Soroka said wheat is the main crop grown in Ukraine. She believes over time there will be an increase in the production of higher value crops.
Kingwell said it could be a while before competing grain exporters feel the impact of Ukraine’s proposed farmland policy change.
It depends on what caveats are placed on transactions and how efficient officials are at processing what could be huge volumes of transactions.
“The production ramifications, dependent on seasonal conditions, are likely to be increasingly felt from 2021 onwards,” he said.