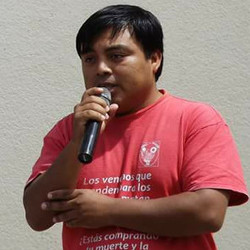 On 7 August 2016, two agribusiness companies, Inversiones Cobra  and CXI,  accused indigenous Maya Q'eqchi' land defender Abelino Chub Caal of inciting community members to set fire to the palm oil crop at the Plan Grande estate, as well as unlawful association for acting as a mediator when the police came to evict 350 people from the El Murciélago estate in October 2016, where they had been engaging in a peaceful protest to defend the land they claimed as theirs against the imposition of economic projects. Chub has been an active member of the Guillermo Toriello Foundation for over 10 years and has worked to protect indigenous communities´ land rights against the imposition of economic projects on their lands.

On 4 February 2017, Chub was arrested and placed in pre-trial detention following a complaint by Inversiones Cobra and CXI.  On 8 May 2018, Chub was formally charged by the Prosecutor with "aggravated land grabbing", "arson", and "illicit association" and taken to Guatemala City prison.  Chub denies being in the area on the said dates.

The Office of the Prosecutor requested the suspension of the case to investigate the crimes Chub was accused of.  However, Judge Anibal Arteaga, from Puerto Barrios, charged him without further investigation. Three of the five crimes Chub was accused of (illicit association, illegal association with armed people and coercion) where discredited by the judge due to lack of evidence, leaving only “aggravated land grabbing” and “arson”.  The two companies appealed and “illicit association” was added back to the list of crimes supposedly committed.  The judge did not accept evidence presented by Chub´s lawyers indicating his honest character and dedication to the defence of his territory and the human rights of his community.

On 26 April 2019, Chub was released and acquitted of all charges by the High-Risk Court A of Guatemala. The Court found that the prosecution had failed to provide evidence of Abelino Chub Caal’s involvement in the alleged crimes.  The judge accused the companies of using the criminal justice system to criminalise Chub, unjustly accusing him of crimes without presenting any substantive evidence.

Two Years of Arbitrary Detention: The Case of Abelino Chub Caal and Why Indigenous Land Must be Returned, Action Aid, 7 May 2019

Guatemala: +130 organizations condemn the criminalization of Abelino Chub for his work defending the right to land, territory and human rights, CEJIL, 24 Apr 2019